This week I completed three weeks of Spanish immersion classes, was joined by Erwin, and said a full and prolonged goodbye to Mexico. 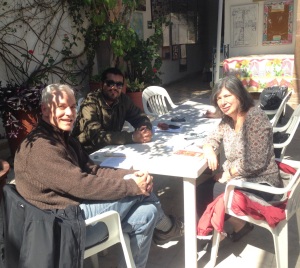 An afternoon discussion class with José Luís (director) and Ellen (a fellow student from Canada). 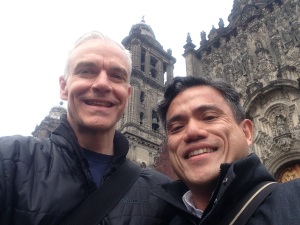 With Erwin outside the Metropolitan Cathedral of the Assumption of Mary, Mexico City. Minutes later, inside, we were blessed by Archbishop Carrera. (Erwin got blessed twice for some reason.)

“Mercy in the Desert” by Manuel Antonio Rodríguez, 1942, in the Palacio de Bellas Artes, Mexico City. Surrounded by the more famous murals by Diego Rivera. 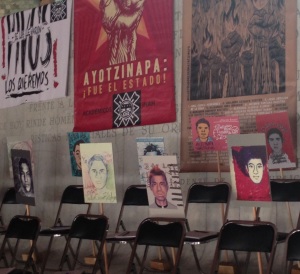 A protest on behalf of the 43 students from Ayotzinapa, disappeared in September 2014 with local Guerrera government complicity. Museo de Anthropología. 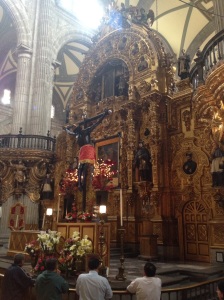 Capel of Forgiveness in the Cathedral, Mexico City.

Our Lady of Guadalupe shrine in my favorite church in Querétaro, Temple of San Francisco.

Hill of the Bells, Querétaro, containing a chapel in memory of Emperor Maximillian, who was executed on the spot in 1867. A beautiful place to overlook the city.