The movement of grace 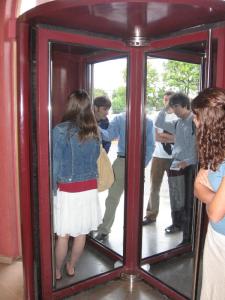 Each Sunday when we proclaim the Gospel, we take the special Gospelbook from the altar and we move with it. We usually step into the congregation at least a little bit. At the High Mass, we move with a whole group of people—a thurifer with incense, acolytes with their candles, as we are led by the cross. If it looks a little like a parade, that’s intentional, since in the reading and celebration of the Gospel, we are proclaiming that Jesus Christ lives among us. We listen for him in the reading and then in the interpretation, and then in the sacraments of bread and wine, of body and blood.

While there’s always some movement in our proclamation of the Gospel, today’s reading almost seems to call for special staging. There’s a lot of movement in this Gospel, and it almost seems like the kind of time that we might be a little more dramatic than usual. We could read portions of the Gospel as we move through the whole church, pausing at various places, and continuing on this way, and that way.

The first image of movement begins in our Old Testament reading from Isaiah. “The people who walked in darkness have seen a great light.” Isaiah speaks to a people in exile, a people cut off from their homeland, a people yearning for a way forward. They are hoping and praying for a better way forward.

In our second reading, the Apostle Paul is preaching to the people of Corinth, where they, too, are looking for a way forward, but they can’t decide who to follow. And so, they each pick a different way and they argue about that—some claim to follow Paul, others claim to follow Jesus. Still others claim to follow Cephas, and Apollos, and who knows who else. What is clear is that the Corinthians are not getting very far because they’re all trying to go in different directions. They’re still stuck in darkness but they’re so busy fussing that they don’t even seem to realize that they’re stuck.

And then we hear today’s Gospel in which those words and images of Isaiah are recalled as Jesus emerges as a leader who shows the way. But his way isn’t easy. “Repent,” he says. “Repent, for the kingdom of God has come near… Follow me.”

The word that he uses, “repent,” is familiar to people who have been around the church a little. Sometimes the word is used as a battering ram or as a threat, but it’s intended as a word of hope, a word of encouragement. Many have heard before that the word means “to turn around.” If we wonder what that looks like, we can begin by looking at Paul, who wrote our second reading to the Corinthians. His was one of the most dramatic turn-arounds. He was a Pharisee, a sort of religious professional concerned with people keeping all the religious laws, and he persecuted Christians. But then he changed. He turned. He repented, and became not only a follow of Jesus, but also a promoter of Jesus and the way of Christian love and life.

And that’s what can happen when one actually follows Jesus. There can be a real turning—a turning around, a turning toward something new, a turning into a person better than you might have ever imagined.

Too often (if you’re anything like me), we turn, but we keep on turning. It’s as though we are stuck in a revolving door—we turn around, sometimes making a big fuss out of the new direction we’re going or the new habit we’re adopting– in a New Year’s resolution, or in the season of Lent– but then before we know it, we’ve simply turning around and around. And we keep on turning until we eventually grow dizzy and we lose heart. Sometimes we’re flung out of the revolving door and fall on the ground, broken and battered.

But the kind of turning, or repentance, that Jesus leads us through involves leaving something behind, turning in a new direction, and moving forward with others.

Paul says that “If anyone is in Christ, that person is a new creation; the old has passed away and the new has come!” The old is passed. The door can be shut and the key thrown away, as we turn.

We leave the old habit, or sin, or resentment behind, and we turn in a new direction.

We allow Jesus to take our hand and turn us in a new direction so we can’t even see the old anymore. Some versions of Christianity make an enormous point of this particular part of the turn-around. “Put your faith in Jesus,” and everything will be just fine. Faith becomes a one-on-one between me and Jesus, but that’s only part of the conversion. There’s another part to repentance.

That third part of repentance happens as Jesus puts our hand in the hand of another. We don’t go through it alone, and the person who experiences forgiveness in solitude from God alone usually only exists in movies and over-edited lives of the saints. More often, in order to keep facing the new direction, moving into the new place of forgiveness and light, we move with others, who also are looking to repent, to change, and to renew their lives in Jesus Christ. Grace can be apprehended alone, but I think it’s most often felt in relationship.

There’s a great story about this communal understanding of grace in a new book by Jay Bakker, [Fall to Grace: A Revolution of God, Self, and Society] the son of Jim and the late Tammy Fae Bakker. A young man named Jared tells his story. His father was a minister and Jared was a rebel. He did everything he could to go his own way. In his late teens he drank and drugged and slept around a lot. He was the “other guy” who broke up two marriages. But at the age of 23, he discovered his latest girlfriend was pregnant. It was about that time that he went to his parents’ house, looking to raid the kitchen, and his father asked him to step outside for a minute. Jared writes that while his father had been strict, he’d never known him to be violent, but at that moment he was afraid. But he went outside. His father looked at him and asked, “are you doing drugs?” At a kind of breaking point, reading to get out of the revolving door or turning round and round, Jared blurted out, “Yes!.” And then he went on, “there’s something else. You’re going to be a grandfather.” There was silence. There was a pause. And then something amazing happened. His father got tears in his eyes, looked at his son, and said very quietly, “So, what are we going to do about it?”

This is why we are “church.” This is why any Christianity that is not communal quickly becomes something else entirely. We need one another and God works through one another for healing and forgiveness.

And so, as I suggested earlier, today’s Gospel is a Gospel-on-the-move. It falls flat if it stays in the pretty silver book on the altar. It dies in this place if there is no echo from our reading. It remains useless if its movement doesn’t continue through this service and move with us into the world, as we go out changed, forgiven, and freed.