Finding our place in the dream of God 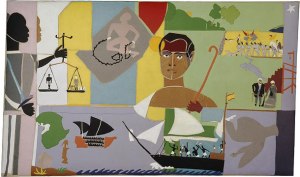 Yesterday I was able to go to a concert given by the group Sweet Honey in the Rock. The group began year ago, but has cycled new members through over the years. It remains an amazing a capella group of African American women who sing about justice, about hope, and about life.

The concert yesterday was in celebration of Martin Luther King, Jr. What was so refreshing for me was the way in which they celebrated. They didn’t offer dramatic readings of King’s words. There was no slide-show of his life. Instead, they had done the hard work of what we Episcopalians might call “reading, marking, and inwardly digesting” his words, so that the performance managed to convey and invite the audience into the life of Martin Luther King.

When I use the term, “calling,” I mean to describe one’s deepest sense of purpose, one’s sense that this is the right thing to do and the right time to do it, I mean one’s sense of being selected by God to do a specific thing.

There are two sides to understanding one’s calling—the first has to do with recognizing the caller, who is God. But the second part comes in recognizing ourselves in the midst of God’s calling.

John illustrates what it’s like to recognize the one doing the calling. He sees Jesus as the Lamb of God. We might think of a lamb as a soft, weak thing. In Judaism the lamb was an animal of sacrifice and as a symbol, the lamb represented innocence and blamelessness. But a lamb also had undeniable strength. Because of the lamb, people were forgiven. Because of the lamb, people were joined again to God.

And so when John names Jesus as the Lamb of God, he is in part prophesying, perhaps in part hoping, and in part stating what he has already seen to be true, that through Jesus people are brought closer to God. Through the life, death and resurrection of Jesus, we experience the healing of sins, and the resurrection to eternal life in God’s love.

John recognizes Jesus. The other disciples, Andrew and another, see Jesus, but also begin to recognize themselves.

When Jesus sees the two disciples, he asks them, point blank, “What are you looking for?” The disciples don’t really answer him, but instead, they ask for more time. They aren’t sure what they want, but they know they want to know Jesus a little better. After a while, Andrew goes to his brother and says, “We have found the Messiah.” But what he’s also saying is that he has found himself; he has found his calling.

Of course, sorting out one’s calling is more difficult than simply opening your heart to Jesus, and “poof,” an entire game plan is presented. It’s much more subtle than that. Whether you should be a fireman or a secretary, a nurse or a schoolteacher—whether you should buy a house, or take a new job, or pursue that special person… I don’t know the specific answer to those or many other questions…

But I do know how to find the answer. It lies in doing what the disciples did—spending time with Jesus, absorbing his words, absorbing his vision of the world, hearing God’s word through Jesus, hearing the promises of scripture and watching as they’re fulfilled in everyday living.

Frederick Buechner talks about the two sides of finding one’s calling—of recognizing the caller, but also of recognizing ourselves in the midst of that calling. He explains that to be called is to have a vocation—the Latin word, “vocare” means simply that: to call; and so a vocation is simply one’s calling—whether that be over time, or in the moment.

Buechner points out that there are always different voices calling us to different kinds of work—the trick is sorting out which voice is from God, which from society, which from a voice of super-ego or sole self-interest. The trick for the Christian is to find 1) the work that one most needs to do, and 2) the work that most needs to be done. In other words, Buechner says, vocation is that place where “your deep gladness and the world’s deep hunger meet.”

The meeting of our deep gladness and the world’s deep hunger happen in prayer, in worship, in fellowship and community; in struggle, in grief, in joy… in the midst of the sacraments. We live into our vocations together.

May we continue to be a people who dream the dreams of God. May we find the resources to follow, and may we find the risen Christ even as we find ourselves.