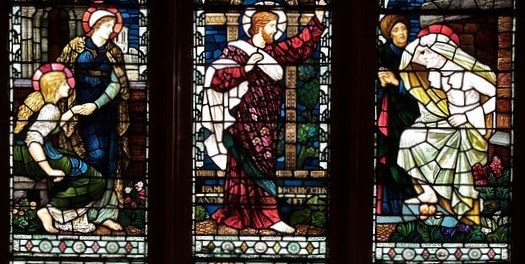 You can watch the sermon HERE.

Every once in a while, after Sunday worship, as our volunteer tour guides are taking people through the church, if it’s the beginning of the tour, I interrupt.  If people are new to our building, they tend to stare at the stained glass.  The southern side of the chancel shows characters from the Hebrew Scriptures and the northern side shows New Testament figures. In the apse, the rounded part around the altar, there are scenes from the life of Jesus. But there’s a mystery, or what can appear to be a mystery.

This church had existed in other locations as Holy Trinity before this building was built.  Unfortunately, we don’t have a lot of notes from the conversations between the building’s benefactor and builder, Serena Rhinelander, and the designer of the stained glass, Henry Holiday. And so, we don’t know if the content of the windows was Serena’s idea, or Holiday’s.  But one would think, walking into a church named Holy Trinity, there would be a prominent, if not huge, image of the Trinity.  Perhaps something traditional like an aged figure with a beard, a younger Jesus on the Cross, and a dove representing the Holy Spirit hovering nearby.  Or perhaps just a window of the three-sided trefoil, such as appears elsewhere in our architecture. Or the three figures from Genesis, the angels who greet Abraham and Sarah and prefigure the Trinity.  But no.

Central to the church, in a place of highest prominence, above the main altar, are two scenes from the life of Jesus. The window at the bottom is of the healing of the blind man, perhaps the story from last week’s Gospel.  And above it, in what might be the place of highest honor, is the depiction of the raising of Lazarus.  At one side are Mary and Martha, at the other, a standing Lazarus, and in the middle, Jesus full of life, perhaps already full of eternal life.

This window, and the Gospel that inspires it, remind us of a central aspect of our faith.  The resurrection of Jesus that we celebrate at Easter is huge—but at the risk of blasphemy, is it so incredibly that God’s own child could be raised from the dead?

Imagine what this window must have said to the immigrants and the working poor who lived in this neighborhood when the church was built.  It’s not a high and lofty, theological musing on the doctrine of the Holy Trinity. Instead, it’s a depiction that God the creator, by the power of the Holy Spirit, through Jesus Christ is a God of life and resurrection.

But it’s not always easy to remember this, much less life with full faith.

Martha, in today’s Gospel, gives voice to what a lot of us might ask.  “Lord, if you had been here, this would not have happened.”  As though asking that greatest of all questions: where is God when bad things happen?  Where is God when a deadly virus goes out of control? Where is God when healthcare workers and providers, themselves, get sick?  Where is God, to allow corrupt (or worse) leaders to thrive?  Where is God in addiction, or sickness, or loneliness, or death?

Jesus doesn’t answer Martha directly. But what he says hints at what is to come: “I am the resurrection and the life. Those who believe in me, even though they die, will live, and everyone who lives and believes in me will never die.”  Jesus then looks into Martha’s eyes and asks, “Do you believe this?”

Do we believe it?  Marth answers a little like I might—“Yes, Jesus, I believe that in the end, you bring all things to completion and renewal. All things come to live again.  Like Teilhard de Chardin, my believe in resurrection involves the entirely of creation—every plant, every animal, every person, redeemed and brought to new and complete life in the love of God.

But on a Monday morning? I’m not so sure. For the hungry and the refugees around the world—I’m not so sure.  For those living alone or afraid…. The resurrection is needed now, not some time in the future.

But faith says that the Resurrection begins now.  With faith in Christ, we will be brought out of the cave of death, and also, out of any cave we encounter.

Those who know me, know that I love St. Francis.  The stories about his life, and his own words, show me a wild and wonderful God who surprises and disappoints, but who never leaves us alone and who always brings to new life.

During the early days of Francis’s deeper conversion to Christ, Francis often went to little caves and quiet places to pray. In one cave, in particular, Francis went to a very deep and dark place within himself. But he kept his faith and God met him there.  Something happened. Something changed.  Something took hold in Francis in a new way.

The man who went into the cave was not the man who came out again; in that sense he was almost as different as if he were dead, as if he were a ghost or a blessed spirit. And the effects of this on his attitude toward the actual world were really as extravagant as any parallel can make them.  He looked at the world as differently from other[s] . . .  as if he had come out of that dark hole walking on his hands.

When the world is upside down, what better way to see it clearly, than by walking on one’s hands?

Perhaps this time of pause, distance, and isolation can be for us something like a cave.  Not a cave of barrenness and death, not a black hole of non-existence… a cave of resting and renewal, a place where God is already with us, but also a place from which God will bring us out of and into a new existence.

We will lose things. We have already lost things—jobs, familiar places, routines.  Some have lost loved ones.  And there will no doubt be more loss along the way.  But the story doesn’t end in the cave.  OUR story never ends in the cave.

Lord Jesus, by raising Lazarus from the dead you showed that you came that we might have life and have it more abundantly. Free from the grasp of death those who await your life-giving presence and deliver us all from any cave of darkness or fear. Amen.