St. Elizabeth & the Moment of Magnificat 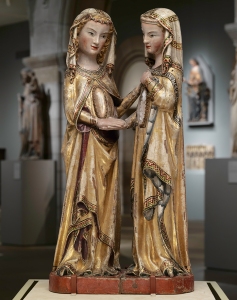 If you go to the Metropolitan Museum this season and walk towards the Medieval European Court, the Neapolitan Christmas tree grabs all the attention.  But leading the way towards it are silent witnesses that also point to the Incarnation, the fact that God has become human in the birth of Jesus.  In the gallery just before reaching the big Christmas tree, there is a small, amazing carving that portrays a part of today’s Gospel. This fourteenth-century carving of Mary and Elizabeth. It portrays the Visitation of Mary to Elizabeth as the young Mary (who has just found out that she is pregnant with Jesus) visits her relative Elizabeth (who is already well into her pregnancy with the child who will be John the Baptist.)

The sculpture is by Heinrich of Constance, a German sculptor, and comes from a Dominican convent in what is present-day Switzerland.  The sculpture would have stood as an invitation for the nuns to meditate on the stories of Mary and Elizabeth, on their bond, and on their faithfulness.

The sculpture shows the two women almost as equals—similar in age, height, appearance, and confidence.  But that’s not the way church history comes to us, is it? Mary is known and loved. Her song, Magnificat, is sung and performed and prayed daily, and people think of her often.

But what about Elizabeth?  We don’t hear much about Elizabeth. We don’t celebrate St. Elizabeth’s Day, or have churches named after her.  Orthodox Christians maintain a little more tradition around Elizabeth and her husband Zechariah, suggesting that during the slaughter of the innocent children by King Herod, Elizabeth hid John the Baptist and was able to save him.  The same tradition suggests that Zechariah died a martyr’s death, that he is the Zechariah mentioned in Matthew 23:35.  Islam honors Elizabeth as favored by God, blessed with a child after having been barren, being mother of John the Baptist and wife of Zechariah.

But Elizabeth is like so many quiet characters in the story of our faith—people (many of whom are women) who are faithful, strong, courageous, follow God, and nurture the faith of others.

Earlier in the Gospel of Luke, we’re told how both Elizabeth and Zechariah are descended from the priesthood of Aaron and that both are “righteous before God.”  But Elizabeth is barren, and they are both growing older. The Angel Gabriel appears to Zechariah and tells him that he and Elizabeth are going to have a child, but Zechariah doesn’t believe him. For his disbelief, Zechariah is struck mute, until (Gabriel explains) all these things come to pass.  Whether Elizabeth gets a visit from Gabriel, we’re not told, but it seems that Elizabeth has faith somehow to understand God’s will from the very beginning. She knows she has conceived and she recognizes it for the blessing it is.

Mary’s situation is very different from Elizabeth’s—Mary is a good bit younger, probably still in her teens, and she’s not yet married.  But Mary, too, has faith in God and believes the Angel Gabriel.  Mary also knows she can turn to her relative Elizabeth.

Some versions of scripture will refer to Elizabeth as Mary’s cousin or kinswoman, but we’re really not sure.  The word used can refer to someone who is a blood relative or someone who is close to the family, so we can simply assume they were very close.

While Zechariah is struck mute—unable to speak, but only able to write, Elizabeth is able to say, tell, prophesy, praise, and interpret to her heart’s content. Because of her faith and perhaps her wisdom, Mary could turn to Elizabeth. And in Elizabeth, Mary found a mirror of her own faith—someone older and faithful who could guide her and stand by her for the road ahead.

Sometimes we might be called upon to be like Elizabeth.  Grounded in prayer, with a sense for God’s presence and movement, we are able to help another person see God moving in his or her life. Perhaps like Zechariah, God might invite us to keep our mouth shut for time.  Or, like Elizabeth, God gives us the words to comfort and to encourage.

Notice what happens when Mary is giving the support and encouragement from Elizabeth—Mary sings her song, the song we know as Magnificat, from the first word in Latin.

Many hear in Mary’s song reverberations of Hanna’s song in the Hebrew Scriptures.  Both Elizabeth and Mary would have probably known Hannah’s song and understood it as a thanksgiving for the blessing of a child, as well as a sign of God’s work in Holy Reversals:

for he has looked with favor on the lowliness of his servant.
for the Mighty One has done great things for me,
He has shown strength with his arm;
he has scattered the proud in the thoughts of their hearts.
He has brought down the powerful from their thrones,
and lifted up the lowly;
he has filled the hungry with good things,
and sent the rich away empty.

Mary finds her voice in the calm, faithful company of Elizabeth.

While we’re sometimes called to be like Elizabeth, there may be other times when we feel like Mary: We’re overwhelmed by news that’s either too good to comprehend or too hard to imagine responding to—and so we see the company of someone who is a little older, a little wiser, a little more faithful.  In the Visitation of Mary with Elizabeth, we’re given an image of the Church—a place where we can turn for help, for support, for solace, for encouragement, and a place where we can find our voice and sing a song of God’s praise straight from our heart.

As we encounter the Christmas story once again this year, may the Holy Spirit help us to see reflections of ourselves in the various characters we encounter.  At times, may we have the faith of Zechariah and Elizabeth—(the faith to keep quiet in the midst of mystery, or the faith to be quietly supportive to a person in need), or the faith of Mary herself—to allow God’s presence in our lives to be born again, to renew, to turn things upside, all for love’s sake.   With Elizabeth and Mary, may we be expectant and filled with joy.