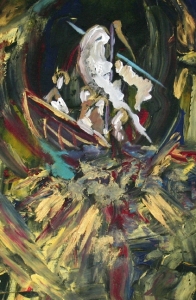 Just north and east of us, in Harlem and in the Bronx, there are children who have tried to cross into the United States borders.  Some have come on their own and others have been separated from their families.  Regardless of how one feels about the pace of immigration reform in this country, or different ways of protecting borders, the mixture of chaos and coldness by too many first makes me angry and then makes me sad.  But also when I read or hear of interviews with some of the people involved, I get confused when various people invoke God.

Sometimes people seem to invoke a god I read about in the Old Testament—a god who orders people into battle and demands the slaughter of enemies.  My own formation as a Christian and my education as a priest have shown me how to read those scriptures in the context of a much larger history and story of God’s love for all creation.  And so, it shocks me when I hear people who are still following, worshipping, and willing to sacrifice for that old, violent god.

But then I’m also confused when I listen to those who are affected by the border crisis—those who flee violent homelands and those who offer them compassion—I listen when God is invoked, because as much as I would like to believe God is in charge and will take special care of “the least and the lowliest,” whether it’s our borders others’ borders, there is a global refugee crisis, and to me, it just doesn’t look like God is doing a very good job of taking care of people.

It comes up in today’s Gospel when there’s a storm and the disciples get scared.  They ask Jesus bluntly, “Lord, do you not care that we are perishing?” But in that case, Jesus is right there, and it soon seems clear that Jesus does care. He wakes up and does a miracle. The wind calms. The sea settles. Jesus cares. God cares, and in that situation a miracle saves the day and restores faith—at least for that afternoon.

The Old Testament character Job must have asked a similar question. “God, do you not care that I’m perishing?” If you recall the story of Job, you remember that he loses everything. He loses family, work, possessions, and finally, even his health begins to suffer. His so-called “friends” sound like anything-but as they give advice and talk, talk, talk, and talk at him. Surely Job has brought all of this upon himself in some way, they say. Surely he’s offended God in some way. Today we might call this “blaming the victim,” and while it’s as old as Job’s friends it’s also as recent as the commentators and politicians in our day.

What’s great about Job, and one reason why we have his story as a part of sacred scripture, is that Job never caves in to the moralistic, simplistic thinking of his friends. Instead, Job goes right to the source. Job prays and talks and even argues a little with God.

Our first scripture reading today is part of God’s answer to Job. It’s beautiful and poetic, but the spoken answer of God is not especially satisfying. It’s as though Job asks, “Why is there evil in the world?” And God says, “Creation IS.” But when Job asks “Why is there evil in the world that’s happening to me?” God responds by drawing closer. It’s like some of the more important conversations we might have: the content is less important than the proximity, the “being with.” God is present with Job. In storms and in good weather. In sickness and in health. In life and in death and in new life again.

What Job’s friends may have been trying to do, but did clumsily, is what Paul is trying to do with the church in Corinth in his Second Letter to the Corinthians. The Christians there had all sorts of problems – with each other and with Paul. But Paul cautions them not to lose hope—remember all we’ve been through, and the faith that has brought us this far. More specifically, Paul says, “As we work together with Christ, [don’t] accept the grace of God in vain.” Another translation puts it, “Don’t squander …[the] marvelous life God has given us.”

Here, I think Paul hits on something that was not only a problem for first century Christianity, but also a huge problem for twenty-first century Christianity. Grace has come to us. It comes at our baptism or before. Grace perhaps comes again at other times in life, but we forget. We get distracted. We are overcome by the storms of life so that all we see is the rising water and the crashing waves, the lightening and the thunder. We say to ourselves, “Sure, God calmed that storm, but what about this one.” Sure, God was with me when I narrowly escaped a car accident. God was with me on the other side of the successful surgery. But what about the complicated issue of THIS day? What about tomorrow?

When we “accept the grace of God in vain” we still think of ourselves as Christians, but it just doesn’t mean much. We forget the power of Christ. And that’s what grace is—not a soft, wispy glow that comes over us when we’re good or when God thinks we’re special.

On Friday, someone died who was a friend and former parishioner at a church I previously served.  Dick Leitsch had been an early member of the Mattachine Society, one of the first gay rights groups in the country.  Dick and his friends tried to take a lesson from the Civil Rights “sit ins,” and so he and his friends decided to stage what they called “sip ins,” calmly going into bars, telling the bartender they were gay, and then seeing if they got served.  Most bars and restaurants would not serve gay or lesbian people and could risk their liquor license or worse, if they did.  The Stonewall raid and riots opened things up dramatically in 1969, but Dick Leitsch’s group had paved the way.

The Mattachine Society was accused by others of being too slow, too subtle, too patient.  But Dick just kept going.  Over time, it paid off.  He did the same thing in other aspects of his life, as well—with relationships, with friends, with work, and with church—all areas where initially Dick was rejected, told he was a misfit, and shut out.

Dick Leitsch never took God’s grace for granted, but used for love’s sake.  In his later years, every Wednesday afternoon, many other weekdays, and almost all the major feast days of the Church, Dick would be ushering in the back of the church, small-talking people, welcoming them, pointing out aspects of the architecture, and quietly living out God’s grace.

We MUST NOT take God’s grace in vain. As children of the living God, we have died to sin in the sacrament of baptism and we have been raised to new life in Christ. We have been sealed by the Holy Spirit and marked as Christ’s own forever. And that MEANS something. That MEANS everything.

In answer to the question that comes out of scripture and out of our lives, God does not let us perish. Things might not be easy and they might not look very good ahead, but the love of God surrounds us, the presence of Christ moves us forward, and the fire of the Holy Spirit helps us go with God’s energy of love and healing.

The storms of life will come for us and for others. We may feel as singled out and persecuted as Job, or we may feel like Job’s useless friends—unable to say or do anything to help. But God’s grace is never in vain. God’s grace enables us to love, and love, and love even more.

In the name of the Father, and of the Son, and the Holy Spirit.