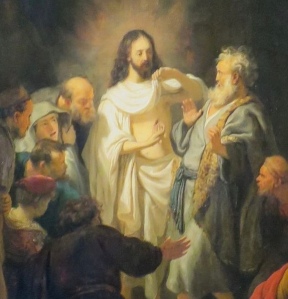 Though the cathedral for the Episcopal Diocese of New York is up on 110th Street and Amsterdam, the Cathedral of St. John the Divine; I’ve met a few people who were mistaken and thought our cathedral was in midtown, diagonal to, and a couple of blocks north from St. Patrick’s (Roman Catholic) Cathedral.  They mean St. Thomas Church, of course.

St. Thomas, at 53rd and Fifth, is a massive building in French High Gothic style. (If you want to go to England for a subway fare rather than a airplane fare, it’s a great place to go for Choral Evensong some afternoon.) When you go in, the first thing you see is an enormous reredos over the High Altar. It’s made up of a multitude of saints, and just over the altar is a carving of St. Thomas and Jesus, St. Thomas (as one architectural explanation puts it), “kneeling before Christ, his doubt gone.”

As beautiful as that church is, and as faithful as its many ministries are, I wonder if the building itself doesn’t in some ways apologize for St. Thomas a little too quickly? For me, anyway, the great power of St. Thomas’s witness, is that he doubts, and the story of his doubt has been handed down through the ages.

We hear about Thomas in several places in the Bible. Thomas was a twin. That’s what his name means really. Some have supposed that he may have been the twin brother of Matthew. Earlier in John’s Gospel, when they hear the news their friend Lazarus is dead, it’s Thomas who wants to go with Jesus. Sensing danger and not knowing what’s ahead, Thomas nonetheless has the faith to say, “Let us go with the Lord, so that we may die with him.”

When Jesus is giving his farewell discourse to the disciples, he talks about going down a road and to a place where the disciples will not be able to follow. But it is a place they know. Thomas speaks up and says, “But Lord we don’t know where you’re going.” But Jesus affirms that by knowing him, they know his destination since as Jesus says to them, “I am the Way, the Truth and the Life.”

Thomas is with the disciples when they are fishing and Jesus appears to them. This occurs in chapter 21 of John’s Gospel, a part of the Gospel that many biblical scholars think was added on to the original Gospel. The chronology is confusing and it’s unclear whether fishing expedition and the Easter fish-fry happened before or after the story we have in today’s Gospel.

Thomas sometimes seems more theologically alert than the other disciples, asking the penetrating question, urging Jesus to explain himself. The early church understood Thomas as the author of another Gospel. There is a collection of sayings called the Acts of Thomas, and there is an apocalypse of Thomas. Tradition has it that Thomas sailed to India and spread the Gospel there. After a long life of preaching and working with the poor, he was martyred in India, but Thomas’s body was taken to Edessa, where his relics were an important source of inspiration to the Syrian Church in the 4th Century. A father of Indian and Syrian Christianity, Thomas continues to inspire.

A more recent poet & priest, (Thomas Troeger) has put it this way:

These things did Thomas hold for real:
The warmth of blood, the chill of steel,
the grain of wood, the heft of stone,
the last frail twitch of blood and bone.
His brittle certainties denied
That one could live when one had died,
until his fingers read like Braille
the markings of the spear and nail.
May we, O God, by grace believe
And, in believing, still receive
the Christ who held His raw palms out
and beckoned Thomas from his doubt

It was not enough for Thomas to hear of the resurrection from Mary Magdalene. It was not enough for him to hear of it from the two who were on the road to Emmaus. Thomas’s faith came more stubbornly, and had to take into consideration more information. His faith was different from theirs—what appears to others like doubt, indecision, even a lack of faith—for Thomas, it was simply HIS faith. It was his way of faith. A way that was willing to struggle, to look for truth deeply, to weigh the evidence, and only then, move forward.

Jesus had already appeared to the other disciples. He had breathed on them the very Spirit of God and they were spirit-filled. The shared in the resurrection as it brought them new life and filled them with the very life of God, and began to move them out of the locked room into the world. But Thomas had not been with them. “Unless I see in his hands the print of the nails, and place my finger in the mark of the nails, and place my hand in his side, I will not believe.”

Peace be with you, Jesus says. And Jesus then offers himself—the resurrected body that still bears the wounds, though they are transformed. The Gospel does not tell us whether Thomas actually touched the wounds. There is room for our imagination.

In Rembrandt’s great painting of Thomas and Jesus, The Incredulity of St. Thomas, Jesus stands showing the wound in his side. The disciples are amazed and look on with wonder, and Thomas stands back in surprise, in shock. It is Caravaggio’s painting that is much more explicit—darker, more intimate, more shocking really, because in it, Thomas actually places his finger in the wound. As in the Gospel of John itself, some believe without signs, some need signs.

St. Thomas not only stands as the father of Indian and Syrian Christianity, he also stands as a patron for those whose faith does not come easily, with those whose faith includes a measure of doubt, a bit of suspicion, maybe even a little cynicism. It’s ok to doubt. It’s ok to wonder. It’s ok even to be a little suspicious—especially since for one (if not more) suspicion eventually has led to sainthood.

Especially at this time of year, may we be honest with out doubts and honest with our belief, knowing that wherever we may be, God loves us and wants to be near us.