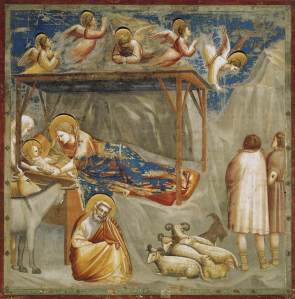 “Glory to God in the highest” reverberates through this night. We sing Gloria and we hear it sung and the music is grand and the images are lofty. But there’s a potential problem. And it’s a problem that can make us miss the whole meaning of Christmas.

No, the angels are singing because of what God has done and is doing—not in heaven, but here on earth. The angels sing “Glory to God in the highest,” because of the glory of God in the lowest.

“Peace on earth among those whom he favors,” is the way the New Revised Standard Version of the Bible puts it. And just look who God is favoring: those the Virgin Mary sang about when she first realized what was happening: God’s showing mercy to those of faith, giving strength to the weak, the lifting up the lowly, feeding the hungry, giving hope to the hopeless and the helpless. God’s promises are being kept.

Glory comes not to the highest and holiest, but to the lowest and the least.

It is often said that Mary and Joseph were poor. How poor they may have been economically, we just don’t know. The fact that Joseph was a tradesman meant that he, at least had a way of making money. But, income would depend on demand and a precarious economy. As Jews in an occupied Palestine, Mary and Joseph would have been poor in a way similar to today’s Palestinians: their movement would have been monitored or controlled and their human potential restricted. In addition, as a young Jewish woman, Mary was relatively poor in social standing—no voice or authority. Add to that the fact that now she is pregnant and not yet married.

Whether Mary and Joseph were materially poor is a question, but what seems very clear is that became extremely poor spiritually.

When I say that they were “poor spiritually,” I mean that they got that the place where they had given up their own willpower, their own need or imagined ability to control things, or even to make everything work out. Ilia Delio, a Franciscan scholar, defines spiritual poverty as a kind of “poverty of being,” as letting go of the need to control and possess and recognizing our need for one another. She writes, “Compassion is the poverty of love that can reach out, even in the face of opposition, and embrace.” It’s that compassion that Joseph showed by understanding and trusting Mary. Mary showed that compassion for herself and for others. She taught that kind of compassion to her son Jesus. And many believe that in her ongoing life in the Communion of Saints, Mary continues to offer that compassion, that poverty of self and spirit, even now as she prays for us.

Because Mary and Joseph are spiritually poor—looking to God for everything, every minute—they probably didn’t really notice the worn out manger, the straw, or the dirty animals. The tradition of confusing the shepherds with the wise men might have begun right then, as we imagine that for the friendless and afraid Mary and Joseph, smelly shepherds would have looked like royalty, the way friends look when they come to us and we’re tired, afraid, and need help. The shepherds are visitors of peace and wonder, and they come singing their own song of praise: “Glory to God in the lowest. They sing, “Glory to God in this little insignificant baby, born in the middle of nowhere, to people no one ever heard of.”

The angels sing up a symphony of praise to God, but it’s aimed at the poor and suffering, the lowly and least.  In the birth of Christ, God has become poor. The highest has become the lowest.

St. Basil the Great, a fourth century bishop, expands on this idea in one of his sermons. He writes

God on earth, God among us! No longer the God who gives his law amid flashes of lightning, to the sound of the trumpet on the smoking mountain, within the darkness of a terrifying storm, but the God who speaks gently and with kindness in a human body to his kindred. God in the flesh!…..He is the Lord who has appeared to us, not in his divine form, in order not to terrify us in our weakness, but in the form of a servant, that he might set free what had been reduced to servitude. [Homily for the Birth of Christ, 2, 6]

Christmas tells us that God is with us—when we’re full of life and things are going well, and especially God is with us when we’ve lost hope and see no way forward. If we are a little confused about how God can be glorious in the highest and the lowest, we’re in good company. This is the work of the church—it’s what we do. Every Sunday and in-between we read scripture, study tradition, and listen to our own heart of experience to get to know God-the-transcendent through God-the-immanent.

The Virgin Mary also seems to wonder about how God can be glorious in the highest places but also in the lowest. How can God be large and small at the same time? How can God be out there, and also in here? Scripture tells us that Mary “treasured all these words and pondered them in her heart.” Perhaps we can take her lead, join her and the Holy Family on our knees, at the manger-turned-altar and glory, treasure, and ponder God who loves us this much.

In the name of God the highest and lowest, the holiest and most human, Amen.