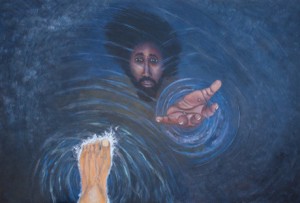 As I’ve followed the news about Hurricane Harvey in Houston and the surrounding areas, I’ve thought a lot about faith in such a situation.  I know a couple who are priests in Houston and have followed them on social media, praying for them, but also admiring their tenacity and focus in the midst of so much that could overwhelm.  (Our bulletin insert and our newsletter list a number of ways we can respond and help, and I urge you to be generous as your heart suggests.)

Whether it’s a natural disaster, a human-made disaster, or a smaller-day-to-day disaster at home or at work—it’s easy to feel unmoored, to be thrown off center, to be knocked off our foundation.

But we’re not alone in this.  In today’s Gospel, we hear about the disciple Peter, who last week was strong as a rock, but this week is sinking in quicksand.  What causes that kind of change?  And when we lose faith, when we’re less than solid in our footing, how do we find our way back to a firm foundation?

Last Sunday, Peter was on top of the world. Having misunderstood Jesus on several occasions, having lost his faith and found it again several times over, having denied Jesus after the Resurrection, but then being redeemed—in last Sunday’s Gospel, Jesus renames Simon Peter. He emphasizes “Peter,” which in Aramaic means “rock.” And so on Peter the Rock, the whole church is founded. But this week is different.

If CNN were following the story, I think Peter might appear under the “Worst Week” heading: “It was a ‘worst week’ for Peter; for getting in the way, slowing down the coming of the kingdom of God, and being called ‘Satan’ by Jesus Christ… you had the worst week.”

Last Sunday’s readings showed us Peter as “rock,” the one who had full faith in Jesus.  But this week, Jesus calls Peter a stumbling block.

How, exactly, has “Peter the Rock” become “Peter the problem?” Well, I think it has to do with Peter’s image of Jesus and Peter’s perception of what God is up to. Earlier in Matthew’s Gospel, Peter recognizes Jesus is the Messiah, and he says as much. But very quickly, Peter begins to get his own ideas about what all of that means. He begins to imagine Jesus not in the image of God’s making, but in the image of Peter’s making. Jesus becoming a king or, becoming a great leader like the Caesar, or at least like a Temple priest or local ruler. Like the other disciples, Peter may have also come to have certain expectations about how he would fit into this new kingdom of God, with Christ as King—maybe Peter would be put in charge of something important. Maybe Peter would have a position of responsibility. After all, hadn’t Jesus called him the Rock? Great things were sure to be coming, it was only a matter of time.

But then when Jesus begins to explain to the disciples that he “must go to Jerusalem and undergo great suffering at the hands of the elders and chief priests and scribes, and be killed, and on the third day be raised,” Peter says, “No.” No way, Lord. God forbid it, Lord. This must never happen to you.” And with that statement (a statement that surely represents Peter’s unwillingness to accept the will of God), Peter falls out of his place as a foundational rock for the church. He becomes a stumbling block. Jesus is sharp with Peter: “Get behind me Satan,” he says.

The word that is translated as “satan,” means “accuser,” one who (like the devil when Jesus was tempted in the wilderness) suggests cutting corners, taking the easy way out, and looking out for number one above all else. “Get behind me, Satan,” Jesus says. “You are a stumbling block to me; for you are setting your mind not on divine things but on human things.”

A similar thing happens to Jeremiah in our first reading. Jeremiah has the work of speaking hard truth to a lazy and self-satisfied Jerusalem. With Babylon to the north and Egypt to the south, Jeremiah warns Jerusalem that it should look to God. But then, even as he warns the city, Jeremiah falls victim to his own despair, and becomes self-consumed. He laments to God, “I’ve done my part. I’ve said the difficult things and I’ve stood up for you, God, but no one listens.” Jeremiah begins to doubt his ministry and even to doubt the goodness of God. He asks, “Why is my pain unceasing, my wound incurable, refusing to be healed? Truly, you are to me like a deceitful brook, like waters that fail.” Jeremiah, through his own doubt and despair, becomes a kind of stumbling block to God’s way, but God picks him up and puts him where he needs to be, as God says, “I am with you to save you and deliver you, says the LORD. I will deliver you out of the hand of the wicked, and redeem you from the grasp of the ruthless.”

Last week, Peter was called “the Rock.”  The scriptures helped us to think about how we, along with Peter and believers from every age and place, are called by God to be like building blocks, like living stones that make up the church. As living stones we do our best to be the Church, Christ’s Body in the World:  to provide strength for the weak, refuge for those not accepted elsewhere. We attempt the feed the hungry (both the physically hungry and the spiritually hungry) and we do our part to be rock-with-rock, stone-alongside-stone. But sometimes we fall out of place, like stones that fall out of a wall?

We fall out of place like Jeremiah. It’s hard to live a life of faith, and so we might get to a place of doubt and despair. We become self-consumed and wonder when we’re going to get our share. Or perhaps we fall out of faithful place like Peter. We get our own ideas about what God’s kingdom should look like and what our place should be within it. We are filled up with our own sense of what we want, or what we think we deserve, or how God should be blessing us.

We might do it in other ways. St. Paul warns us against becoming stumbling blocks for others through our living—when we say one thing with our lips, but say another with our lives. We can become stumbling blocks for God’s way through our attitude or outlook, through arrogance that holds ourselves apart from others, or even through negligence that surrenders to the world, assuming that God has no plan, or that God has forgotten us.

The Good news of today’s Gospel is that once we are called, carved, created to be God’s living stones, God never forgets us. There’s no flood strong enough to wash us away.  Each of us is precious and has his or her place in the building of God’s kingdom. Whether the storms of this world threaten to dislodge us from places of spiritual stability, or whether we become stumbling blocks ourselves, God, in his grace, gently kneels down to scoop us up, brush us off, and places us in again in a more faithful place. We can give thanks that God’s grace and favor go with us always, helping us to be God’s house of living stones.  In the name of the Father, and of the Son, and of the Holy Spirit. Amen.