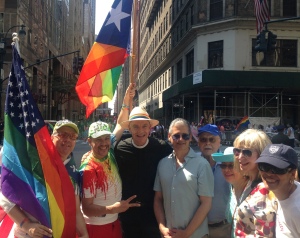 The other week, our church’s Facebook page invited parishioners and friends to join with others from the Diocese of New York for this Sunday’s parade demonstrating support for the Lesbian, Gay, Bisexual, and Transgender (LGBT) Community.  The event is commonly referred to as the “Pride March.”  A priest I know tried to be clever by posting a response to our invitation, suggesting that there was something odd about having a parade “celebrating one of the seven deadly sins.”  While his comment was unhelpful and showed a real pastoral ignorance, it also underscored for me just how easy it is for the Church to silence, shove aside, and ignore groups of people by suggesting that they are sinful whenever they assert their humanity.

The heart of our faith involves our knowing and celebrating that we are made in God’s image, we are redeemed by Christ’s Incarnation and sacrifice, and we are renewed by the indwelling of the Holy Spirit.  We should be proud to be Christians.

Of course, pride in the extreme can be a problem. Whenever it becomes a “love of one’s own excellence” pride can blind us to the needs of others and to the reality of our own humanity.  But just as humility sometimes is misunderstood as silence and letting others walk all over us, pride is sometimes too quickly seen as negative.

True humility and Christian pride come together in faithful discipleship.  When Jesus called the little children to himself, don’t you suppose they felt an appropriate pride?  When Jesus said to the many on the mount, “blessed are you…” , don’t you imagine them just about bursting with pride?  And as Jesus welcomed women, and outcasts, and those who had been thrown down and out by society, don’t you think they might have felt pride for the first time in their lives?

In St. Paul’s Second Letter to the Corinthians there is a masterful speech to the puffed up, self-congratulatory, egomaniacal in his midst.  He uses irony to say, “You want boasting?  I’ll show you boasting…” And then Paul lets loose.  He maked fun of the various things people boast about, the roots of their pride.  He concludes, “If I must boast, I will boast of the things that show my weakness” (2 Cor. 11).

When we boast of weakness, we show solidarity with the poor, the children, the aged, the sick, the outcast, the misunderstood… and that’s Christian pride.  Through such pride, we can grow to understand ourselves to be accepted by God as good, blessed, and capable of great holiness. Through vulnerable confidence, Christ brings us to an appropriate place of prideful humility, a kind of “pride-ility,” if you will.  Paul echoes the earlier words of Jeremiah the prophet who hears God say, “Let those who boast boast in this, that they understand and know me, that I am the LORD: I act with steadfast love, justice, and righteousness in the earth, for in these things I delight” (Jer. 9:24).

I invite you to join me and others this Sunday in celebrating LGBT Pride.  Marching as a priest in a clerical collar, under the banner of my church and diocese, I will be encouraging others to come to know Jesus Christ as God’s humility and humanity among us—and that makes me very proud, indeed.