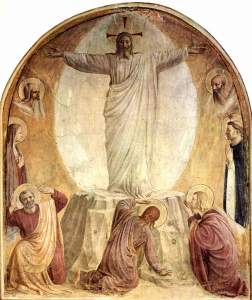 In the Reading from Exodus, Moses and Joshua start up the mountain, but Moses goes further. He goes so far that he enters a cloud. And this cloud wraps him round with the Glory of God and soon Moses begins to get directions from God for how the people should worship God and how they will be able to follow God faithfully in the future. Moses gets details on the making of the Ark of the Covenant, lamp stands, the tabernacle—various objects which would symbolize God’s presence among the people.  Loaded down with plans and expectations, Moses moves out of the cloud and back in, amongst the people he has been called to serve.

Again, in the Gospel, there’s a mountain. But this time it’s Jesus and a few of the disciples who go up the mountain and there up high, Jesus is transfigured. He is changed. They see light, there is brightness all around and suddenly next to Jesus are Moses and Elijah. These are endorsements far beyond anything politicians might hope for. Here is Moses, representing the tradition of the law in Israel and Elijah, representing the tradition of the prophets. Together they offer strength and support. And then God speaks from the cloud: “This is my beloved; in whom I am well pleased. Listen to him.”

People have scratched their heads and wondered about this passage ever since people have passed on holy stories and read the Bible. The church wonders so much that we read this story twice a year: on August 6 at the Feast of the Transfiguration, and again on this Last Sunday after the Epiphany. But whether we read it in August or today, there is mystery and there is wonder, and I think all of this “cloudiness” is intentional and comes right from God. I think God wants to remind us of the mystery in our lives and as we stand on this side of the Season of Lent. God prepares us for the unexpected.

One writer (Frederick Buechner) comments on the Transfiguration, in saying, “It was Jesus of Nazareth all right… but it was also the Messiah, the Christ, in his glory. It was the holiness of the man shining through his humanness, his face so afire with it they were almost blinded.” But, as Buechner points out, we also have places in our lives where God continues to break through. “Even something like that happens to us once in a while,” he writes. “The face of a man walking his child in the park, of a woman picking peas in the garden, of sometimes even the unlikeliest person listening to a concert, say, or standing barefoot in the sand watching the waves roll in, or just having a beer at a Saturday baseball game in July. Every once and so often, something so touching, so incandescent, so alive transfigures the human face that it’s almost beyond bearing.”

Faith empowered by the Transfiguration allows us to see differently. Such faith allows us to see a bulb, but imagine a lily; to see a sinner and imagine a saint. It is the essence of transforming, transfiguring faith that we are helped to see beyond the present and gain a glimpse into the future, into that land of “if’s” and “can’s” and “maybe’s.”

I have a colleague who had a parishioner who told him that when she died, she wanted the Gospel account of the Transfiguration of Jesus Christ to be read at her funeral. When he asked her why, she said, “Because after I die, it will tell people who what I’ve become and how I’ve changed.” When he first told me this story, my colleague said that the lady was still living, but that she was in a nursing home. She had once been an avid reader, but her eyes had given out and she could no longer see to read. She had once been a great storyteller, but she had slowed down and almost had lost her gift of gab. To the eyes of those who might glance in her direction, she was slowly fading. In her very last days, when my friend visited her, he could envision her as she suggested, as she one day shall be: radiant, filled with life, filled with God.

And through the mercy of God, by the power of God, we too are transfigured, little by little, day by day, Lent by Season of Lent, into being God’s faithful and holy people.