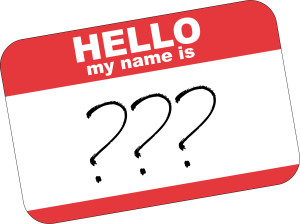 I’ve never really had a nickname.  For the most part, I’ve always been John.  That’s with an H, and it’s not short for anything—certainly not for some longer form adding “a’s” in unexpected places.  It’s just plain John.

There was a short time in college when my two good friends were also named John, and that presented a problem whenever we would appear together.  At that point, one became Jack, another “Tersh” as an abbreviation of his last name, and me—I became JB.  Being Jack, Tersh, and JB, we all relinquished our “Johnship.”

But a lot of people do have nicknames.  In fact, there are a couple of people I could name for you ONLY by their nickname.  If I had to come up with the person’s given name, I couldn’t do it.  When I’ve been around people with nicknames, there’s a question often put to those people.  And it’s a question the church asks us today:  What’s your REAL name.  You may go by “such-and-such.”  Your family may know you by something.  And you may even think of yourself by a certain name.  But today what’s your real name?

In Judaism the real name of God is thought to be so sacred, so beautiful, and so powerful that it’s never said out loud.  Instead, observant Jews often refer to God by saying Adonai, meaning “The Lord,” or simply “HaShem,” meaning, “The Name.”  Is Islam, there is power and help in praying the 99 names of God.  I love one Sunni scholar’s interpretation of the number 99.  He says, “Allah is odd.”   “Allah is odd [being one—an odd number] and loves odd numbers.”  [Muslim ibn al-Hajjaj Nishapuri, Sahih Muslim].  Names are important.

In The Episcopal Church, today is called The Holy Name of our Lord Jesus Christ. In the Roman Church today it’s a special day for the Blessed Virgin Mary, but even there is a focus on a name—the name given to the mother of Jesus.  Their official title of the day is the Solemnity of the Blessed Virgin Mary, Mother of God. Theotokos, the word meaning “Mother of God” is quite a name. It is a name given by the faithful, adopted by the Church; a name argued about and a name prayed to.  Mary got a new name and on the 8th day, Jesus a name.

Eight days after the birth of Jesus, his parents take him to the temple for the customary circumcision and naming. Jesus is circumcised and dedicated. His mother is blessed. And Jesus is given the name that the angel Gabriel had said he should be given.  He is given the name that is a form of the name Hebrew name Joshua.  Jesus means, “salvation is from God,” or “salvation is from the Lord.”

Talk about a big name:  Salvation. His name means that he saves.  In Christ we receive a new name, and it’s a name that saves.  The life of Jesus saves us from a life lived only to the self. The words of Jesus save us from anything or anyone who would demean us or suggest that we are anything other than a child of God.

On this day we celebrate the name that saves and we also celebrate the fact that we share his name. Today being New Year’s Day, it’s a good day to think about our names. What names do we carry with us into this new year? Do they suit us?

Sometimes a name that has been given to us or we have given ourselves limits or restricts. Sometimes it even oppresses. The ongoing discussion about the problem of bullying in schools has reminded us of the power of name-calling.

Sometimes those names stay with us and it takes a lot to change them.  But that’s where God can come in.  Just as, in our first reading, God puts God’s name upon the people of Israel, so God names us.  Like the naming in the Book of Genesis, God calls us “good.”  Like the naming at the baptism of Jesus and at our own baptism, God calls us “blessed” and “beloved.”

The actress Viola Davis is starring in the new movie, “Fences,” but I remember her well from her role in “The Help,” the movie out a few years ago based on the book by Kathryn Stockett. You may remember the scene in which Aibileen Clark (played by Davis), hugs the little girl Mae Mobley close and says, “You a smart girl. You a kind girl, Mae Mobley. You hear me? . . . .You is kind, you is smart, you is important!”  In that moment, and as long as those moments live in Mae’s heart, God’s names overpower whatever small, mean, or hurtful names might have been used by her mother or by anyone else.  Little Mae hears versions of her true name, and hopefully, she will always remember that name.

As we think about a new year and think about those things we might like to do differently, there is the opportunity for us to take on a new name. Perhaps that name describes how you’d like to be in this New Year. Perhaps a new name marks a transition or a turning point for you. Perhaps it is simply a growing more deeply into a name you have already being growing into.