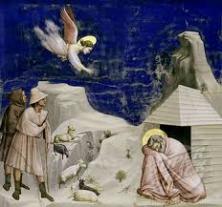 “The Dream of Joseph” by Giotto, Scrovegni Chapel, Padua

For a few years, I served a small Presbyterian congregation in New Jersey.  The congregation was hyper-Protestant: no fuss, no drama, and careful to distinguish themselves from all the strange things done down the street by the Catholics, and around the corner by the Lutherans.  But one thing this bunch of Protestants agreed on was the absolute, essential practice—that if one was trying to sell a house—one must dig a hole in the front yard and bury a small statue of St. Joseph—upside, down.  Everyone agreed this was the thing to do, as obvious as cleaning the living room and listing with a reputable realtor.  One prayer that goes along with this “burying rite” of a St. Joseph statue includes the petition:

I wish to sell this house quickly, easily, and profitably and I implore you to grant my wish by bringing me a good buyer, one who is eager, compliant, and honest, and by letting nothing impede the rapid conclusion of the sale.

When I first met this practice, it drove me crazy.  It borrows from the very worst, the most simple-minded, most primitive, folkloric aspects of faith.  But over time, I’ve mellowed.  I appreciate two things about this practice.  First, in the midst of all the anxiety around selling a house, this is something tangible, active, and harmless that someone can do.  And second, at least people are thinking about St. Joseph.

Joseph so often gets left out.  He’s cropped right out of many a painted masterpiece of the Madonna and Child and he doesn’t even show up on many Christmas cards.

This time of the year, all around the world, as children divide up the parts for Christmas pageants and plays and musicals, I imagine the competition for the part of Mary is still fairly fierce. The wise men have good costumes, and those who are drawn to the stars like to be angels. The animal lovers are a shoe-in for the shepherds. And the smallest, shiest usually get to be the onlookers, the crowd, the neighbors, the innkeepers.

Who wants to be Joseph? He barely has a speaking part at all. Saint Matthew doesn’t tell us until chapter 13 that Joseph is a carpenter. By tradition—and so as to underscore the idea that Joseph was much older and served as foster- father to Jesus, Joseph is portrayed as a bit hollow, a bit removed from the action, certainly not an essential player, and sometimes even a little comical.

It’s true that Matthew doesn’t give us a whole lot to go on. But beginning with the genealogy of Jesus, the very beginning of his Gospel, Matthew has told us something about Joseph. The Gospel of Matthew makes it very clear that Joseph is an important part of what is about to happen. Matthew traces the lineage of Joseph back through King David and then back through to Abraham, the great patriarch of Israel. The point is given away really with the very first words of the Gospel. It begins: “The book of the genealogy of Jesus Christ, the son of David, the son of Abraham.” In other words, Matthew says, let there be no mistake:  Jesus is a king who comes from kingly stock.

We might wonder why Matthew would spend so much energy tracing Jesus’s genealogy back through Joseph, if Joseph is not the biological father of Jesus? The early church asked this question and supposed a couple of different answers. Some supposed that since Mary and Joseph both registered for the census in Bethlehem, perhaps they were from related families. Others, including Augustine, simply pointed out that in the time of Mary and Joseph, paternity had far more to do with affiliation than biology. According to Jewish law, if a man claimed a child, that claim was proof enough. The claim was made solid when the child was given a name. This is why so much emphasis is placed on Zechariah’s naming of John the Baptist. It’s why Joseph’s word counts. When Joseph said “He will be called Jesus,” those words work as an adoption. They establish Joseph’s legal guardianship for the child Jesus, and place Jesus in the royal line from King David through Joseph.

We know that names are important, especially in the history of faith. Saint Bernard draws connections between the Joseph who was the patriarch in ancient Israel and the Joseph we meet in today’s Gospel. Among other similarities, Bernard reminds us,

“The first Joseph had the gift of interpreting the hidden secrets of dreams. The second not only knew heavenly mysteries but even participated in them. The first Joseph stored up grain for himself and for all the people; the second was given charge of the bread come down from heaven for his sake and for the sake of the world. To this second Joseph it was given not only to see and to hear what many kings and prophets had longed to see, but even to carry the little king of kings, to take him by the hand, to hug and kiss him, to feed him and to keep him safe.” (Homily II)

In addition to telling us that Joseph comes from kingly stock, we do get a glimpse of who Joseph is, of how he reacts, of what he’s made of. We’re told that Mary and Joseph are betrothed. This was the first of a two-step marriage agreement. The betrothal is much more official than what we might think of as an engagement. Once betrothed, promises had been made, promises that Joseph probably thinks Mary has broken. And so he contemplates divorcing her quietly.

But then there’s the dream. Do not fear, the angel says.

The angel says to Joseph that the child is to be born of the Spirit of God—the very breath of God that hovered over creation at the beginning, that whispered wisdom into the lives of the faithful, that now has overshadowed and filled and claimed Mary. And his name will be Jesus. Jesus, a variation of Joshua. Just as Moses was chosen by God to prepare the people of Israel for their journey out of slavery. John the Baptist was chosen to begin to bring people out of the bondage of sin. Just as with Moses, Joshua eventually led the people of Israel to the Promised Land, so the new Joshua, Jesus will be the way to the promised land of eternity. And so when Joseph woke up from his very full dream, he did as the angel had commanded him. But who really wants to be Joseph?

I don’t know about you, but I certainly wish I were more like Saint Joseph. I wish I were like him in a number of different ways.

Joseph was able to follow what the church teaches and what he understands of God’s will for his life and the world.  Joseph knew himself as part of the worshipping community. He was religious. He kept the laws. Even when he learned that Mary had become pregnant, he sought to do the morally right thing (which in his eyes would have been to separate from her) though he planned to do this discreetly, not embarrassing or endangering Mary.

In so far as I can, I try to be like Saint Joseph in doing the right thing, but more often than not my doing finds expression in any number of plans or schemes for doing and accomplishing the next good thing. I make my plans, I move ahead, often oblivious to whether I am continuing in God’s way.

Joseph not only looks and listens for God’s direction, but he is also open God’s coming out of left field.  He is open to religious experience. He is open to mystical experience.  His vision comes in a dream, but it might have come just as surely while he was on the job, while he was walking down the road, or while he was on his way to visit his betrothed. Sometimes we talk of those who have had visions of God or have heard a special word from an angel as being specially privileged, unusual and rare. But really, if we were able to speak honestly with one another, we’d find an enormous number of people have had and continue to have religious experiences they cannot understand and cannot sometimes even describe.

A part of our having a religious experience involves our openness. Do we allow God space to squeeze into our lives? Do we allow God the opportunity to revise our plans? I wonder if Saint Joseph’s work as a carpenter didn’t teach him the importance of continuing to take measurements, continuing to calculate the angles, check the materials, and make adjustments along the way as necessary.

Following the laws of Judaism carefully and fully, Joseph initially plans to divorce Mary. But then, being open to God’s intervention, having a religious experience that changed his course, Joseph then is able to set out in the new direction with confidence and faith that seems not to have wavered. How many of us have that kind of faith—the kind of faith in God that can change and grow. It’s a faith that doesn’t grow shakier with the change, but grows stronger and more confident in God’s presence, in God’s power, in God’s love.

Saint Joseph is patron saint of carpenters and workers in general (and, I guess, realtors).  He reminds us that the history of faith is not so much about the saints who accomplished miracles or who led extraordinarily holy lives apart from the world. Rather, the church is made up of people like Joseph, who work hard, allow their work to inform their faith and their faith to inform their work; who listen for God’s word and allow it to break into their lives, and who, in the totality of their lives, are able to point to the one who’s name is Jesus.

A hymn for Saint Joseph’s Day from the 17th century, in our hymnal, puts it well

Christ in whose presence hosts of hell must tremble,
Ruler of all things, Lord of earth and heaven,
Monarch of monarchs, to his earthly father freely was subject.
To God eternal be all praise and glory,
Who to Saint Joseph gave supernal honor,
Grant that we also may like him be faithful in our obedience. [The Hymnal 1982, “By the creator,” 261]

Especially as we move more deeply into the mystery and wonder of Christmas, we continue to pay honor and respect to the Blessed Virgin Mary, Mother of God. That is good and appropriate. But may we also–more and more of us—truly want to be like Saint Joseph, that Jesus, Emmanuel, God with us, might be known and loved by all the world.

In the name of the Father, and of the Son and of the Holy Ghost. Amen.