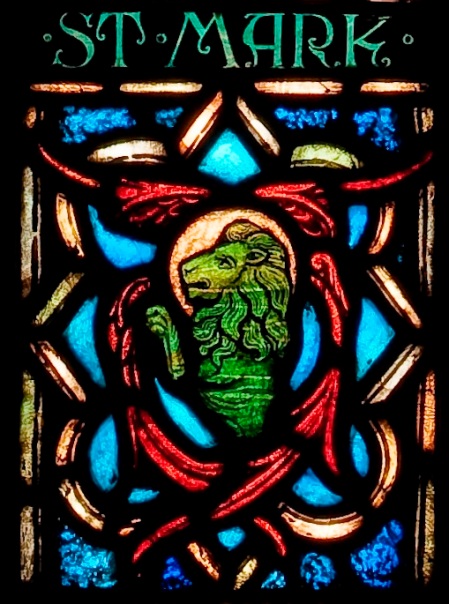 The other day I was standing in line at a Woodley Park fast food shop and a family with two small children was just in front of me.  The little boy, probably about four years old, was inconsolable.  He was crying and crying, sort of blubbering something to his parents, but I couldn’t make out why he was so upset.  I assumed it was just late in the day and he was tired.  When I caught the eye of the mother and smiled, she explained, “We’ve just been the zoo, and he’s disappointed because the lions were sleeping.”  I tried to offer an encouraging smile as I thought about sleeping lions.

April 25 is the feast day for St. Mark the Evangelist, symbolized by the lion.  Mark’s Jesus moves through the gospel like a lion: quickly, emphatically, surely, and with strength and power throughout.  As Richard Burridge notes in his wonderful book, Four Gospels, One Jesus?, Mark’s Gospel also portrays Jesus like a lion who is  fearless in the face of conflict.  Jesus cares for his disciples like a lion caring for its pride.  Finally, Burridge points out that where there’s a lion, there’s usually a “kill,” but in the Gospel, it’s the lion himself who dies, offering himself as a sacrifice for others.  Mark’s Gospel ends with mystery as Jesus, like a lion, “bounds on, roars, and bounds off again, calling us to see him, in Galilee, somewhere” (Burridge, p. 65).

Thinking about the lion imagery of Jesus in Mark’s Gospel raises a number of questions for me.  To what extent do I live my life as though Jesus were a sleeping lion who only concerns me when he occasionally wakes?  Do I dare to claim the strength, power, and ferociousness of faith?  Do I ever risk conflict for the sake of the Gospel, or do I tiptoe past the sleeping beasts of injustice, greed, and poverty?

Furthermore, if the image of a potentially beastly and boisterous lion were extended to the Church, the questions continue.  Do we put one another to sleep for the sake of tradition or politeness?  Do we tame Christ to make him presentable for spectators, or do we invite others to meet Christ and begin what might be the adventure and challenge of their lives?

Join me as we try to live into the invitation from Auden’s For the Time Being in which he writes of Christ,

He is the Way.
Follow Him through the Land of Unlikeness;
You will see rare beasts, and have unique adventures.

He is the Truth.
Seek Him in the Kingdom of Anxiety;
You will come to a great city that has expected your return for years.

He is the Life.
Love Him in the World of the Flesh;
And at your marriage all its occasions shall dance for joy.

In the spirit of St. Mark’s Gospel, join me as we ROAR Good News to the world.