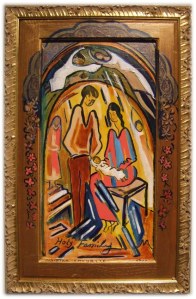 Last Sunday (the First Sunday after Christmas Day) in the Roman Catholic Church, was The Feast of the Holy Family. It’s a fairly recent celebration, from the 19th Century, and popularized by Leo XIII. The day is often used to suggest that the Holy Family of Jesus, Mary and Joseph might be a model of the ideal Christian family. Parents are taught to love one another. Children are taught to listen to their parents. And the mathematics of family is suggested to be that of one plus one equals a blessed three, then four, then five, and so on, with the subtle or sometimes overt suggestion that holiness comes through the human family, and the larger the family, the more faithful the parents.

The Gospel gives images of the Holy Family, but if we look closely, it looks very different from the rendition of artists and many theologians. Its lines are shaky. Its boundaries are blurred. The Holy Family consists of Joseph, probably an older man, who may well have died while Jesus was very young. Joseph is not at the cross. There is Mary, probably a very young woman, a very young mother, unprepared but faithful, unsuspecting, but hopeful. Both Mary and Joseph could be easily ostracized for not fitting in—both had foreigners in their families, and when they went to Egypt, they, themselves became the foreigners.

It all began in Bethlehem, of course, but soon the Holy Family begins to grow.
And it grows in ways no one could have imagined. Shepherds make their way. Wise men from the East—kings, Persians, astronomers. They begin to make their way to the manger, and when they get there, they will find the door open and the welcome warm.

Jesus himself seems to add on to his family as he grows. When he’s twelve, his parents take him to Jerusalem for the Passover. He gets lost, and when they find him, he is in the temple. I imagine him looking at his parents as though this is the most normal thing in the world, as he says, “How is it that you sought me? Did you not know that I must be in my Father’s house?”

When Jesus is preaching and teaching and healing, he’s told that his family wants to see him, and one gets the sense that his family might think he’s gone just a little too far. Jesus asks, “Who is my mother, and who are my brothers?” And stretching out his hand toward his disciples, he says, “Here are my mother and my brothers! For whoever does the will of my Father in heaven is my brother, and sister, and mother.”

Jesus seems never to be satisfied that his family is big enough or strange enough. In the calling of the disciples, he adds tax collectors and fishermen. Added to this are rich folks, civic leaders, military officials and soldiers, former prostitutes, adulterers, thieves, bandits, and everything in-between. All at the same table – that table that was set and shared in an upper room, but extends through time and space to us—at that table continue to be all sorts and conditions of people. Even on the cross, Jesus continues to reshape what family is, as he looks at his disciple and his mother and says, “Woman, behold, your son!” And to his disciple, “Behold, your mother!”

Even as the Holy Family grows and expands, it holds together whenever there is a threat. And in today’s Gospel, the family moves to get out of the way of danger. They listen to the angel of God, and they go where God sends them.

And so that’s what we do, too. We move forward.

We also cherish our family. We hold onto each other, and given thanks for those who God has put in our lives to love and to share love with. We become thankful even for those who make us mad, who rile us up, because we understand the fragility of life, the quickness with which it can come to an end.

And finally, like Mary and Joseph, we simply go. We go forward. We choose life and we try to share it as fully as possible. We follow the one who conquered death itself; we follow Jesus closely, knowing that he will never, ever leave us. We reach out for others. We give of our money and our creativity and our energy to those to suffer. Through Christ, we begin to see just how big our family really is.

Listening closely to God, holding on tightly to one another, and moving ahead with strength and confidence, we step into a new year.

It is with the family that God gives us that we can celebrate a New Year. In Tennyson’s great poem [excerpts] for the beginning of a year, he sings out for us to

In the name of the Father and the Son and the Holy Spirit. Amen.