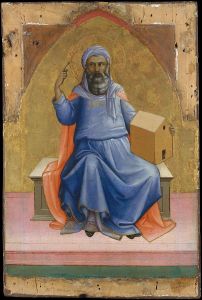 On the second floor of the Metropolitan Museum, there’s a gallery of Italian paintings that has a portrait of Noah. It’s one of four Old Testament figures painted in the fifteenth century by an early Gothic/late Renaissance painter named Lorenzo Monaco (c. 1370 – c. 1425). What I like about the four portraits is that each one shows a patriarch, holding an image that gives a clue of his identity. Moses holds the stone tablets of the Ten Commandments—easy enough to identify. Abraham’s symbol makes sense, as it is his son Isaac. King David, who tradition says wrote some of the Psalms and was a musician, is shown holding a harp or zither.

But then, there’s Noah. You might think Noah would be pictures with animals, or at least a dove. Maybe a rainbow, or surely, the Ark.  But instead, Noah is holding a simple building with a door and window.  It’s meant to represent the Church: the ark as church.

In the scriptures, Peter explicitly links Noah’s ark with the Church, noting that just as Noah’s wooden ark saved people by bringing them through water into new life; the Church saves people by the wood of Christ’s Cross and the water of baptism, bringing us to new life. The early Church built on this imagery and many see in architecture such as our own, a ceiling that looks a lot like an inverted ship. In fact, this long section to the church that stretches from the sanctuary (proper) to the back of the church, or narthex, is called the “nave,” from the Latin “navis,” or ship and was meant to portray the reality that the Church is a ship, protecting those inside it from the waves and buffets of the world. Some have even suggested the flying buttresses on a building like Notre Dame, or even the two buttresses at Holy Trinity represent oars, continuing the ship symbolism.

All of this—this talk of Noah, and arks, and ships, and us—is to draw our attention to the Gospel, in which Jesus says points to Noah as an example of someone who had faith. Be like Noah, Jesus suggests: waiting in faith.

Now, I doubt that many people in Jesus’ day really thought much about whether Noah was an actual person, or whether he literally built and ark and filled it with animals. But I bet a lot of people could relate to Noah—those who heard the Hebrew scriptures, those who listened to Jesus, and us. We can relate to Noah as someone who gets a vague that God is nudging him to action. Once Noah comes to terms with this, he gets busy: even in the face of others who might think he’s crazy, preparations are made, things are put into place, and then it’s time to wait. It’s time to wait for God to act, to move, to make things happen, to point to the next step.

I bet a lot of us have been at that place—we weren’t being asked to build an ark, but it might have felt just as insane. Go to that city. Pursue a relationship with that person. Stop working in this field and go in this new direction. If we’ve ever felt God’s “holy nudge,” then there’s been that sense of presence at the beginning, and then it’s time to wait. For Noah, it meant wondering whether the rains would really come. Would there really be floods? Would his preparation and faithfulness really pay off? And then what would life be like after all the drama, when the waters are dried up and the animals are set free?

Jesus points to this waiting place as a kind of “holy waiting room.” It’s that time in-between, after one has felt God’s presence at the beginning, but before one has begun to feel God’s presence moving into the next step. It is a scary place and a vulnerable place. Jesus knows that whether we’re talking about Noah or us, or perhaps even himself, it’s difficult to wait, to watch and to listen for God. But we can practice at it. And we can learn to wait in faith.

Today, we begin the season of Advent, when the Church invites us to practice these spiritual disciplines of waiting, watching and listening. Advent helps us live with the in-between. The Church remembers and retells the story of the coming of a Messiah, the one who was born in the manger, Jesus of Nazareth. But the other aspect of our waiting and watching has to do with the Second and Final coming of Jesus, as is hinted in the prophetic scriptures and especially in the Revelation to John.

The liturgy helps us to recall the first coming of Christ.
Our prayers also help us to stretch forward for the second coming.
But over and over again, Jesus tells us not to live in the past or the future, but in the “holy now.”

In today’s Gospel Jesus cautions that we should be ready, but it’s not for most of us to go up on a hill and wait for God to come. In describing how we are to wait, Jesus describes some in the field (from which one is taken to be with God.) Others are grinding meal or making bread, and again, one is taken to be with God. We could continue the list—one will be teaching, while one is taken away. Another will be in a meeting, one at a store, another watching the children, and another working outside. In short, since we do not know when or how or where, it is for us to do the work God has appointed for us to do, and to carry on with faith, with love and with charity.

Noah carried people and animals to safety in God’s good grace and time. The Blessed Virgin Mary, like an ark, carried Jesus for nine months and delivered him safely. And Jesus, through the church, carries us through the waters of baptism, through desert dry places, through enemy territory, and even through long, slow periods of intense waiting—but Christ carries us through this life and into the next.

In the name of the Father and of the Son, and of the Holy Spirit. Amen.