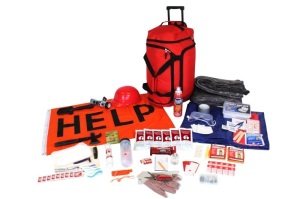 In today’s Gospel Jesus speaks about living in an age of anxiety. He talks about the difficulty of living in that place between obsessing on the future, and ignoring it. Jesus says that even there in Jerusalem, the centerpiece of Israel’s worship, the symbol of God’s presence among his people—the temple, Jesus says, will soon be no more. The day will come, he says “when not one stone will be left upon another; [and] all will be thrown down.” The disciples hear this and they become alarmed—whether they think Jesus is going to storm the temple and help bring it down, or whether some calamity is on its way—the disciples ask him, “Teacher, when will this be?” And, how will we know when it will be about to happen?

Sensing their anxiety, Jesus slows them down. He begins to warn them about those who will come and take advantage of their sense of the final days. Some will make the most out of a sense of impending calamity, and some will do what they can to exploit fear. Some will say, “the time is near,” Jesus cautions. Others will say “wars and insurrections are coming.” But again, Jesus says, “Do not be terrified,” because certain things will happen along the way. In classic language of the end times, language that might have been from Isaiah or Daniel or Enoch or John the Baptist, or John the Divine, Jesus says, “Nation will rise against nation, and kingdom against kingdom… famines, earthquakes, plagues…” And then Jesus seems to warn them that as his followers, the religious leaders are going to question them and perhaps punish them and perhaps even persecute them.

But in the face of all of this, Jesus counsels that they should remain calm. Don’t even plan beforehand what you might say. Trust in God and trust in Jesus. He says, “not a hair of your head will perish,” which is not quite true given that soon after, Stephen is persecuted, John is killed, and many, many others will die for their faith. But Jesus is talking about something beyond what may happen to the body in this world.

Scholars tells us that in the first century, with rumblings in the Roman Empire and potential uprisings in every corner, a sense of the apocalyptic, of the end of time, was in the air. But beyond being a history lesson or a window into the life of Jesus, what does this say to us? Most of us do not risk being persecuted for our faith. Much of our culture regards Christian faith as superstition. It’s an emotional or psychological crutch. It’s thought to be quaint; just a nice, old-fashioned cultural affectation.

For some in the church, perhaps that is an accurate characterization. Some may hold on to an almost pagan faith that if they’re good, they’ll be protected by God. But if something bad happens, God must be angry. But in this Gospel and others, Jesus encourages us to look at life head-on and also to hold on. Hold on to Christ, and his presence will save. Something about the presence of Jesus in our lives—this Jesus who was born, lived a life like ours, was crucified, and raised from the dead—this Jesus still lives through us and gives us the strength, the courage and the tenacity to live in with faith for final days—whatever shape that “finality” may take, whether (in the words of one preacher, Fred Craddock) “we go to Christ or Christ comes to us.”

At the end of today’s Gospel there is an important word. Jesus promises, “By your endurance you will gain your souls.” By enduring—that is, simply living out our faith—getting up in the morning, saying our prayers (when we remember), loving our families (if we live with them) and going through the activities of the day, with as much faith and trust in Jesus Christ as possible. This is our preparation. This is our practice. This is how we become prepared for whatever may come.

Though Jesus counsels we shouldn’t over-plan our response to the future, he also models the kind of life that can take on anything. As we live in tumultuous times, we should probably do more about a survival kit, an emergency plan. But I think we also need a spiritual emergency plan, based on practices that will sustain us.

If we are not connected with Christ, if we’re not grounded in God, then storms, crises, problems, all can overtake us. A spiritual emergency kit might include at least four things: 1) a prayer, 2) a practice, 3) a place, and 4) a person or two.

A Prayer is a good thing to have at hand. Whether you make the Lord’s Prayer your own, memorize a prayer from the Book of Common Prayer, or just come up with your own—a prayer can save the day. It gives you your breath back. It gives you a pause. It reframes and re-focuses. You might choose something traditional like the classic “Jesus Prayer” (Lord Jesus Christ, Son of God, have mercy on me, a sinner.) Or, the Ave Maria from the Rosary. Or maybe just the simple, “I am here, you are here, thank you.” —it’s good to know a prayer so that whenever you need it, it’s right there with you, inside of you.

A spiritual emergency kit would also include a practice of some kind—a practice you can do without thinking about it, something calming and routine that puts you back in your own spiritual zone. It might be yoga, or meditation, or prayer using the Daily Office. It would be riding a bike, or walking for twenty minutes. Or, you could do like a friend of mine who simply gets a massage. No matter what crisis comes, she responds first by scheduling a massage. After that, she can worry, plan, recover, and deal with whatever problem has come alone.

A place that is holy and grounding can be a life-saver. When you feel like the world is spinning out of control, you simply go to your place and be still. A holy place might be this church or another. It might be a chapel at the cathedral, a garden, a special stretch of the city, or just a special chair. But it’s a place to return to, a place to center and hit a spiritual “re-set” button.

Finally, a spiritual emergency kit would include the phone number of a person, or a way of reaching a friend. That friend might be a religious person, or it might not be, but it should be someone who you can tell the truth to, someone who will listen but not judge, absorb what you’re saying and not give advice. Such a friend will help get you through the roughest of rough places.

In just a few minutes, during the Offertory, the choir will sing Beatus Vir by Antonio Vivaldi (1678-1741). Though Vivaldi’s “Four Seasons” plays in bathrooms and lobbies throughout the year, and Vivaldi’s “Gloria” will no doubt sing us through Christmas, the composer Vivaldi is not much talked about. His father was a violinist, and he grew up learning to play instruments, but early on, because of some kind of asthma, couldn’t sustain enough breath to play a wind instrument. Vivaldi trained for the priesthood and was ordained, but had to be excused from celebrating Mass—again, because of his ill health. In the middle of conversation or teaching, he would gasp for breath and sometimes get dizzy. For almost 38 years, he taught and composed at the Devout Hospital of Mercy in Venice (Ospedale della Pietà ). Though he was wildly successful for some years, with patronage from royalty and the Church, when younger composers came along, Vivaldi fell out of favor. He never married, and died in poverty. It was only later, that his music was dusted off and made popular again.

But through his asthma, through the long years of working with children in an orphanage, through the rough times with not attention and no income, Vivaldi endured. His spiritual survival kit certainly included music, but it also contained a steady faith in the God who takes us through life, through death, and into eternal life.

May we gather the tools we need to endure in faith. In the name of the Father, and of the Son, and of the Holy Spirit. Amen.