Waters that Trouble and Heal 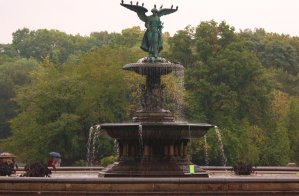 This morning, I’m thinking a lot about Central Park. Not just because it’s such a beautiful day. Not just because there are probably a few people who usually might be in this building on a Sunday morning but today, are in the park somewhere. But I’m thinking about a particular part of the park—one of my favorites. I’m thinking about inside the park at 72nd Street. Down the stairs, across the terrace, overlooking the lake is the only statue called for in the original design of Central Park. It was also the first commission to go to a woman for a public work of art in New York City. Rising up in bronze with water cascading over is an appropriate object lesson for today’s Gospel. Bethesda Fountain, designed by Emma Stebbins in 1868, is crowned with the Angel of the Waters.

It depicts today’s story of the healing fountain in Jerusalem, Bethzatha or Bethesda, which was thought to get its healing properties because angels would dip down and stir the waters up. In Central Park, Bethesda Fountain commemorates the Croton Reservoir, which also meant healing for New Yorkers, underscored by the four cherubs on the fountain: Temperance, Purity, Health, and Peace.

Bethesda Fountain in Central Park highlights a verse in the Gospel of John that the editors of the New Revised Standard Bible decided to leave out and put only in a footnote. I think that’s too bad, since the verse adds some useful information about what people perceived the healing fountain. The version we read today says in verse 3: “3 In [the porticoes of the pool] lay many invalids—blind, lame, and paralyzed,” and then skips to verse 5, explaining that one man there had been ill for thirty-eight years. But the in-between verse, the one relegated to a footnote says, “for an angel of the Lord went down at certain seasons into the pool, and stirred up the water; whoever stepped in first after the stirring of the water was made well from whatever disease that person had.”
The old Paul Simon song might suggest we wait or look for one who “like a bridge over troubled water” lays down for us, saving us from having to enter the troubling waters. But today’s Gospel suggests otherwise. Healing comes from the troubled waters, not from places of calm.

First, the word to those who wait. The scriptures are filled with stories of Jesus healing, and even of the other disciples offering healing. Prophets sometimes heal, and one woman is healed simply by touching Jesus. If we’re not careful, it can seem like healing from God is instantaneous, like the faith healers we might read about or see on television or in movies. Notice that the man in today’s story had been ill for thirty-eight years. In another Gospel (Mark’s) a woman is healed who has been sick for twelve years. These stories remind us that healing doesn’t always come quickly. Healing doesn’t come with the right prayer, the right amount of faith, the right religious experience. Healing comes in time.

The story of the man at the pool of Bethesda speaks of one who persists, who continues, to carries on—each day, each year, waiting for healing. But this particular story also suggests that the route to healing (for this man) has perhaps been right there all along.

There are also those who look for healing, but overlook what is right in front of them. I’m reminded of the Old Testament story of Naaman, the military commander who had leprosy. He heard that the prophet Elisha was a man of wisdom and healing, so he went to see him. Elisha told Naaman to do something very simple and Naaman laughed at him. Naaman felt different from others, special from others, unique in his own illness. But Elisha knew what would bring healing and told him, but Naaman balked at first. It seemed too easy, too simple, too obvious. It’s not the calm waters that offer healing, after all, but the ones stirred up with holy healing.

The person Jesus meets at the Pool of Bethzatha is right there by the water, but he has all sorts of reasons for not stepping in: “others get in before me,” “there’s no one to help me in,” or who knows what other reason he might give.

This is like the person who limps in pain but whose doctor assures them that if they simply had a knee replacement, the pain would go away. It’s like the person who squints and misreads, when properly made glasses would solve the problem. It’s like the person who wrestles with an addiction and convinces herself or himself that their situation is unique, when there are twelve step groups that offer healing and new life. Sometimes healing is at hand, but we find reasons to delay or not ask for help, or remain just beyond arm’s reach.

And finally, there are those who wish for healing, but don’t know where to start. They need a little help reaching the source of healing. But in both cases, it might not be an angel from heaven who stoops to stir the waters, but it might be me or you. It might be another person—whether healthy and strong, or perhaps someone undergoing their own pathway into healing.

I’ve mentioned before how in the Hebrew scriptures, there’s often some ambiguity around the root word that is used both for “angel” and “messenger.” But I think that’s also a theological mystery—sometimes angels are ordinary people, coming at the right time, offering just the right word, offering a helping hand, or perhaps just being present, in silence.

As majestic and beautiful as the angel is on Bethesda Fountain, it might be that you or I are called to be the angel who prepares the waters for healing, who helps connect one with that water, or who helps to carry a person closer to the source of healing.

Often, when a person needs healing, the professional pastoral care giver (the priest) is not the most helpful person. If one is undergoing chemotherapy, often the most helpful person is another person who has gone through similar treatment. A person who faces having a heart procedure will often be helped by talking with someone who has already had a similar procedure. And certainly, the twelve step recovery movement shows the wisdom and effectiveness of recovering people helping others to recover. And often the most healing person is someone to walk along side, not offering advice, not even talking so much. The great priest and writer Henri Nouwen describes this sort of person as a “wounded healer.” He writes,

To enter into solidarity with a suffering person does not mean that we have to talk with that person about our own suffering. Speaking about our own pain is seldom helpful for someone who is in pain. A wounded healer is someone who can listen to a person in pain without having to speak about his or her own wounds…. We have to trust that our own bandaged wounds will allow us to listen to others with our whole beings. That is healing.” The Wounded Healer, 1979

Who knows when, where, or in what we might be called upon to be an angel of healing, an agent of God’s healing; but I pray that the Holy Spirit would continue to stir the holy water and to show us how to help stir up the spirit of healing and health.