With Dorcas in mind 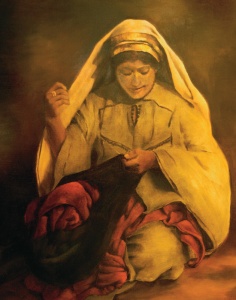 It works out nicely that on this Sunday, observed as Mother’s Day by many, the scriptures give us a picture of someone who seems to have been a wonderful mother of faith. We don’t know if she had children of her own, but she certainly had spiritual daughters, sons, and an enormous family to follow.  The reading from Acts talks about Tabitha, whose Greek name was Dorcas.  The Acts of the Apostles gives us a picture of how the early church was growing, with energy and faith in the resurrection, with Mary and the other disciples spreading the word, and with local, everyday people putting their faith in Jesus and changing the world right where they lived.

Dorcas seems to have been such a woman. She was “devoted to good works and acts of charity,” but news reaches Peter that Dorcas has died.  When he reaches her village, he meets all the women around her, weeping, sharing memories, mourning, and, as scripture says, “showing tunics and other clothing that Dorcas had made while she was with them.”  Peter heals Dorcas and she is raised up, presumably, to live an even longer life of good works, acts of charity, and making clothing for those who need it.

The name of Dorcas continues in the Christian Church, with Bible studies, prayer groups, and Christian ministries named after her.  Especially in the 1800s, the Dorcas Society begun in England established various chapters in the United States.  An especially strong one was the African Dorcas Society, founded in 1828 in New York.  Women who were members of the society pooled their resources and made clothes for poor children to be able to attend school, especially those attended the African Free School.

Whether we actually hear something we think may be the voice of Christ, or simply choose to listen for that voice—the voice of God’s love towards us, the music of God’s peace, the sound of the Spirit’s strengthening—faith involves our trying hear and developing our ability to tune out all the noise and static, so that we can really listen.  Some may hear it clearly. Others may hear it only partially, or trust that others hear it.  But our being here, in this place, is an act of our obedience to God, recalling that the word “obedience” comes from the Latin, ob-audire… to listen, to hear.

But do we also listen for our own name in the sound of God? To “hear our own name” means to begin to discern our own path for being faithful.  Sometimes we can do that alone. We sense God’s invitation to use a part of ourselves, to develop a talent, and to share it with others.  But often, we’re slow to hear God alone, and we need other people. That’s where the whole community of faith comes in, as we help one another discern God’s gifts.  It happens when someone says to you, “I notice you’re good with kids. Would you consider helping teach Sunday school or volunteer for a special children’s event?”  Or, “I notice you have ideas about the church, may I nominate you to stand for vestry or serve in some other capacity?”  On and on, goes the encouragement, the listening, and the discernment.

The third part of our Collect of the Day involves following where Christ leads.  The Good Shepherd and lamb imagery breaks down when we think about this third part.  God has given us a great deal more freedom and willpower than a lamb has.  We can choose to follow the way of God in Christ, as we hear it ourselves, and as it’s amplified in Christian community, or we can choose to go some other way. Often we can choose an in-between.  We sense where God wants us to go, but we don’t feel strong enough, faithful enough, or ready enough.  Maybe we stop still, in fear.  Or maybe we veer off to the right or left.

We do something similar to what we think God is calling us to do, but with less heart, with less faith; we do something more within our own capabilities, with less spiritual challenge, or something we don’t have to necessarily fall into the arms of God for.

The somewhat scary word, “vocation” can sometimes be used in a kind of all or nothing way.  But I think a person can have several vocations, if one is open to God’s Spirit.  Frederick Buechner has defines vocation as “the work God calls you to do.”  He explains,

By and large a good rule for finding out is this. The kind of work God usually calls you to is the kind of work (a) that you need most to do and (b) that the world most needs to have done. If you really get a kick out of your work, you’ve presumably met requirement (a), but if your work is writing TV deodorant commercials, the chances are you’ve missed requirement (b). On the other hand, if your work is being a doctor in a leper colony, you have probably met requirement (b), but if most of the time you’re bored and depressed by it, the chances are you have not only bypassed (a) but probably aren’t helping your patients much either.

Neither the hair shirt nor the soft berth will do. The place God calls you to is the place where your deep gladness and the world’s deep hunger meet.  (Wishing Thinking: A Theological ABC, p. 95).

When I think of an openness to God’s calling and vocation, I think of my college friend, who I’ll call Laura.  Laura majored in business and did well, graduated, and quickly began working for a large bank.  She did well and was fairly happy, though worked long hours.  When she met her husband, who also worked in banking, she began to be open to a change. She prayed a lot about this, asked people at church, and continued to listen for God’s prompting. Laura became pregnant, which filled her mind/body/spirit with new life.  But through her pregnancy, an idea began to grow.  Once her son was born, the idea seemed to be encouraged from every direction.  Laura wanted to be a nurse or a midwife, somehow to assist other women in bringing children into the world.  She went back to college to take a few science classes, enrolled in nurses training, and after a few years, began working in a hospital on the newborn wing.  Her early vocation was as a banker. Her midlife vocation is as a nurse.  Who knows what her later life’s vocation might be?

The Church itself is sometimes understood as Mother Church—because it gives birth to faith, to new vocations, and to new life.

On this and every day, may God “Grant that when we hear his voice we may know him who calls us each by name, and follow where he leads; who, with you and the Holy Spirit, lives and reigns, one God, for ever and ever.”