Growing Up (with the Spirit) 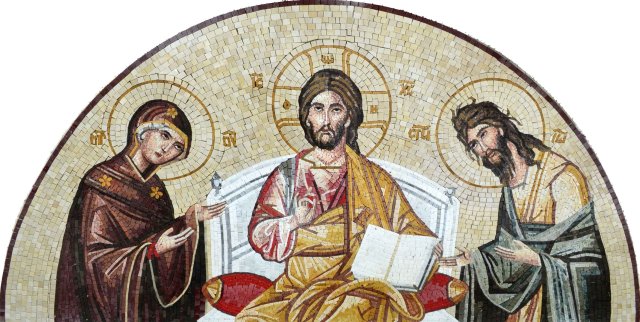 I had a nice surprise yesterday. I came home from our Vestry planning retreat and began to get settled, when the doorbell rang. When I opened the door, I initially did not recognize the woman in front of me—until she gave me her name and reminded me that we had gone to junior high and high school together.  We see each other on social media and comment on each other’s pictures of dogs.  Through the years, she has watched me move, begin ministry here, and travel to various places. I’ve watched her go through the loss of parents and a husband, and follow the course of her adult daughter and their three dogs.  While we caught up on this and that, we also talked about what brought the two of us so far away from North Carolina. Leaving home, for me, came with schools. Leaving home for my friend was a part of making a break with the past and looking for something new.

In today’s scripture, Jesus has left home and then returns.  And he’s all grown up. He’s changed. And he’s begun a public ministry of teaching and healing. While Jesus had grown up mostly in a small town named Nazareth, at some point, he got out. He’d seen things, and experienced things. He’d developed his own take on the world.

Some of this we know about from the Gospels: Jesus was baptized by John, he struggled with demons in the wilderness, and he taught in synagogues. Saint Luke says that Jesus was pretty well received, that he “was glorified by all.” But then he comes home.

We heard about this last week, as Jesus came home and went into the local synagogue. There, he read from the scroll those liberating words from Isaiah. But then he added the zinger. Jesus said, “Today this scripture has been fulfilled in your hearing.” We got the first part of this story last week, but this week, it continues.

Momentum has been building around him. People speak well of him. They wonder at his wisdom, but that’s where they begin to get confused – after all, they know him, don’t they? Isn’t this just Mary’s boy? Isn’t this the stepson of Joseph, the carpenter?

Jesus hears their skepticism, and so he reminds them of the longstanding tradition of a prophet being welcome in almost every place EXCEPT for his or her home town. Jesus reminds them about the Old Testament prophet Elijah, who was sent to Zarephath. Elisha could have healed all the lepers of Israel, but instead, he healed the foreigner, Naaman the Syrian. Jesus’s suggestion that God’s mercy doesn’t always “stay local” just makes these people even madder.

Using a Super Bowl analogy, here, what should be a home advantage for Jesus quickly turns into a win for his enemies. The game almost ends as people in the synagogue try to run Jesus out of town.

Jesus has grown up. His faith has grown up, and he’s preaching a “grown up” Gospel. But people don’t want to hear it. Growing up in faith is hard to do—for Jesus, and for us.

In our first scripture reading, we hear how “growing up” or maturing in faith is hard for the Prophet Jeremiah, too—but for different reasons. We’re told of Jeremiah’s growing pains—especially in relation to his calling from God. Jeremiah had an even more complicated leave taking—he had tried to get away from home and leave the familiar but found he needed to face a few things first. “Before I formed you in the womb I knew you,” God says, “and before you were born I consecrated you.” “I appointed you a prophet to the nations.”

Jeremiah tried to get out of this calling. He complained to God, “I’m too young. I’m inexperienced. I’m not trained. I’m not fit for service.” But God called him anyway. Later, when people seemed to ignore him or when they laughed at him, Jeremiah felt like he’s all alone. He moved away from almost everything that is familiar and comfortable. He ends up so far separated from those he loves, that he feels cut off from God. “O LORD, thou hast deceived me,” he says. But slowly and somehow, Jeremiah later realizes that he has, indeed, grown up into a new faith, a larger faith, a more mature faith. And God has been with him all the time.

Spiritual growth comes so often when we are willing to leave what is familiar. We grow with God often by leaving home, though “home” can be many different things. We’re sometimes called to move to a new job, with new expectations and challenges. Sometimes we’re called to move into new relationships where patterns and behaviors are different. Sometimes we’re taken to new cities or perhaps even new countries and we find ourselves needing to make new friends, to develop new social networks and to re-define family away from home.

And then, at times, the move away from home is more psychological, emotional, or spiritual.

I had a friend who died just a couple of years ago, but she had “moved” a lot spiritually, even though she rarely left her home town. She lived in a one-bedroom apartment in New Jersey, but she read, she wrote friends, she prayed, she continued to learn until last year when she died. It’s no surprise, then that Charlotte had a well-traveled soul. Like in today’s Gospel, she was often misunderstood and made fun of by her family and even her local church. They didn’t understand her need for challenge or growth, and they sometimes found it threatening. But what I knew of Charlotte’s faith was her deep relationship with a God who almost plays hide and seek, who invites us to rise to a challenge and longs to show us new and complex depths to his love and mercy.

God calls us to grow up in our faith.

First, I think we can grow as individuals by praying perhaps more often, or perhaps by praying in a different way. If you’ve always prayed with words and you’re feeling tongue-tied, perhaps pray with your body—through movement, or walking, or dancing. (This Lent, there’ll be a morning workshop on March 30 that looks at the very basics of prayer:  What is it? How does it work?) If you’ve got a question about God, chances are others have asked that question. Ask a priest, or check a library, or search the Internet and learn different answers to that question you’re carrying around.

And second, I think we may be called to grow up in our faith as a church, as a congregation. The parts of our common life that make us warm and friendly, cozy and accessible, should never change. But I wonder if we’re aren’t also being called to dust ourselves off a bit, get to know our neighbors better (the old ones and especially the new ones) and engage at a still deeper level. As our city officials wrestle with homelessness, perhaps we’re being called upon to add our voice—a voice of faith based in experience. As families move into our neighborhood, perhaps we’re being called on in new ways to help overworked parents teach children about spirituality, about music, and about mission. As more and more people walk by this church every day, I wonder if God isn’t calling us to make the welcome more explicit and offer the Living Water that we KNOWS quenches and soothes, but also enlivens and strengthens.

Christ calls us to take his hand and grow. Risk offending. Risk being misunderstood. Risk being thought a little crazy. Risk loving too much, too freely, too widely, and too long.

This kind of “growing up” can seem scary. We might feel like children desperate to be close to a parent. We might feel like teenagers, unsure how the growth will show itself next, or how we’ll feel or what we’ll believe tomorrow. We might be like middle-aged adults, a little smug and tired, and wondering if God can really show us anything new. Or we might even feel like we’ve already done about as much as we can do—the good news this day and always is that God is not finished with us yet.

Wherever we are, whoever we are, we can be confident in the adventure of faith because God is with us. Just as God reminded Jeremiah that he was known in the womb before he was born, God has also consecrated us and chosen us. God knows each of us. God knows our fears and our limitations, but God also knows our potential and what we are made for.

As we learn to leave the cozy places of our faith, let us grow together— in love and mercy, in grace and forgiveness, and in joy and strength.