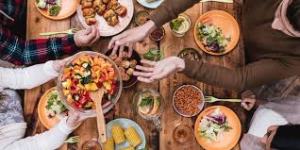 The Bible doesn’t say what kind of fish or what kind of bread was used to feed the thousands, but one thing is for sure: Jesus planned on having leftovers.

From the bounty and abundance, through the miracle of multiplication, all were fed. The scripture says “from the fragments of the five barley loaves, left by those who had eaten, [the disciples] filled twelve baskets.”

If you think about it, this is not unusual for Jesus. Wherever he goes, things seem to multiply. At Cana he makes water into wine, and it flows freely. On the Sea of Galilee he tells the disciples to throw their nets in one more time, and fish are suddenly everywhere. And now, here, on the other side of Galilee, Jesus does it again. He enlarges, expands, and transforms a little bit into a feast for all.

For the feast to happen—and for there to be extra– Jesus does three things.

First, he has a vision: Jesus can imagine people being fed. He can see it. Last week the Church read Mark’s Gospel and we skipped over Mark’s version of the feeding of the thousands. Had we read that version (or Matthew’s or Luke’s, for that matter) we would have seen a remarkable lack of vision on the part of the disciples. The disciples there look at the situation and only see a problem. They don’t identify with the other people and they see the hungry crowd as God’s problem, not theirs.

But today’s version of the story is different. According to John, Jesus is the first to notice the people’s need and he then almost quizzes the disciples to test their vision. For Jesus, the vision is real, even though the means of achieving the vision might not yet be clear. And so the first step in planning for leftovers is having a vision.

Next, Jesus shares the vision as he invites others into it. He makes it clear that he needs help. Turning to Philip, Jesus asks, “Where are we to buy bread…?” Philip responds like the disciples in the other Gospels: “Six months’ wages would not buy enough ….” Notice how Phillip talks about money. He’s a realist. He knows what it is to earn a wage. He knows the market. But even though he may be good with numbers, he’s slow to catch the vision of Jesus. Andrew is quicker. Andrew gets the vision and imitates Jesus by inviting others in. It’s Andrew who locates the boy with a few loaves and a few fish. Sharing in the vision of Christ, Andrew sees possibility in the boy’s offering. Like Jesus, Andrew doesn’t know exactly how it will end, but he invites the boy to be a part of the solution and moves forward.

First, there is the vision of people being fed. Then invitations go out to enlist the help of others. And then, there’s a third piece to this process toward leftovers. Jesus prays.

It might be tempting to see Jesus’s prayer as a stop in the story, a slowdown in the action. But it’s really just the opposite. Prayer is action in high gear. It’s concentrated effort. It’s energy condensed, channeled, and directed toward God.  St. John Vianney (the 19thcentury priest known for his simplicity and spirituality) used to say, “Private prayer is like straw scattered here and there: If you set it on fire it makes a lot of little flames. But gather these straws into a bundle and light them, and you get a mighty fire, rising like a column into the sky; public prayer is like that.” This is what happens when Jesus prays. People notice because of the quality and the focus and the love. The disciples see him and add their prayers. Then the people see the disciples praying and add their prayers. On and on it goes as priorities shift in prayer from our will (our hunger, our hope, our desire) to God’s will (the world’s hunger, the world’s hope, the world’s desire.) In praying to God, Jesus was reminding himself and everyone else that the work they were about to do—this multiplication of bread and fish—was not their work at all. It’s God’s work in which they are privileged to share.

Everyone is fed and there are fragments left over. Sometimes these are tangible fragments, like the extra bread and fish the disciples are able to put into baskets. But other times, the leftovers can almost be missed because of their subtlety. There may be increased faith left behind. There may be an expanded sense of family or community. Individuals who previously had no calling might find an entirely new vocation. There may be a fragment of joy at simply having accomplished something in the presence of God, something larger and mightier even than the combined efforts of all those present. Frederick Buechner calls this a miracle, “when the whole is greater than the sum of its parts. A miracle is when one plus one equals a thousand.” (The Alphabet of Grace, p. 87)

A few years ago the Church of England did a great study called Faithful Cities. The report celebrates the ministries of smaller churches and especially encourages us to claim what it calls, “Faithful capital,” which is a leftover, really. Faithful capital is increased as communities of faith “make a decisive and positive difference in their neighborhoods through the values they promote, the service they inspire, and the resources they command.” (Faithful Cities, p. 76). Holy leftovers become faithful capital through what one person has called “a thousand tiny empowerments” (Leonie Sandercock, in Faithful Cities, p. 2)

Planning for leftovers is hard and sometimes goes against our nature. We’re taught to conserve and be careful. Especially in seasons of scarcity. Play it safe. Don’t anticipate. Don’t over-extend. Expectations, after all, lead to resentments. On and on it goes: the caution and the fear. But as a people of faith, we need to remember that this caution can lead to a mentality of maintenance. And when our chief motivation is maintaining what we have, we’re on the sad road that leads from a people in mission to being a museum. And from being a museum to being a mausoleum.

We currently do pretty well with leftovers.  With food left over from film shoots and meetings, we sometimes supplement coffee hour.  With donated leftovers from Dig Inn restaurant, we have good meals for our shelter guests.  We do what we can with left-over vegetables from the CSA that delivers here and try to use donations, but we can do more.  We can do more especially with “faithful capital,” allowing the benefits of our parish to overflow into the community.

Maintenance and mission need not be mutually exclusive. For most churches, both are part of being the people of God. At Holy Trinity, we have a beautiful, old building. There would be nothing faithful about letting it fall apart. But at the same time, we’re called to envision and invite and pray about how we can be more—more involved in our community and the world, more engaged with the issues, and more responsive to the needs of those who hunger physically and spiritually.

In the Last Supper with his disciples, Jesus again took bread. He blessed it, broke it, and shared it. And we do the same. At this altar and the altar we use in the garden, at the tables in the Mission House, in the tables of restaurants and homes, and wherever we celebrate the feast, may the Holy Spirit enable us to move with God’s vision, invite others, say our prayers and always plan for leftovers.