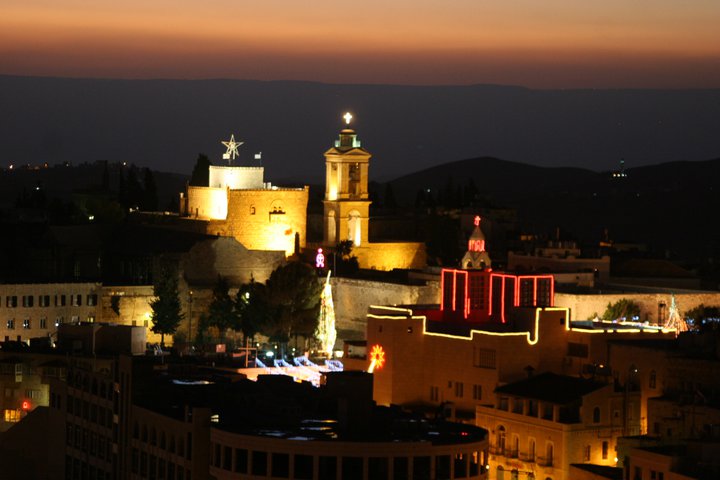 It’s not easy to get to Bethlehem. If you’ve ever visited Israel and tried to get there, then you know what I mean. Though it’s only about six miles from Jerusalem, Bethlehem is within the West Bank, under the administration of the Palestinian National Authority and it symbolizes so much of the complexities of that part of the world.  On one hand, it suffers from economic depression and obstacles put in place by the occupation of Israel.  On the other hand, it suffers from corruption and poor leadership by the Palestinian Authority.  And so, if you make it through one of the 29 checkpoints, you make it to Bethlehem.  Some days, it’s clear to pass.  Other days, the gates are closed.

About 20 years ago I was able to get to Bethlehem—but the bus ride from Jerusalem felt more like a 60-mile ride than a 6-mile ride. Once inside, near Manger Square, the cynic in me had to fight the feelings of frustration at all the commercialization of the place—everywhere there were olive wood carvings, saints, rosaries, and just about any religious-related item you could imagine. But once inside the Church of the Nativity, all my cynicism fell away.

The dark, barnlike church was first built by Constantine in the year 326. Standing in that great, old place, it occurred to me that even if Jesus were not born on this very spot, down in the grotto chapel—he wasn’t born far away. It’s a special, mysterious place.

In that heavy air of burning candles and lingering incense, you can fell the holy residue of the prayers and intentions of pilgrims over several thousand years. All this time, each in his or her own way, people have brought their joys and their sorrows, their highest hopes and their lowest fears, placing them there—on the site of a cradle, where a baby lay, and people came to visit from all corners of the earth.

It’s not easy to reach Bethlehem in our day, but perhaps it’s never been easy to get there. If you think about it, it certainly wasn’t for Mary and Joseph.

Joseph had to overcome the ridicule of those who thought he was being made a fool of—it didn’t much matter whether the source of the trouble was the Holy Spirit or the guy from the next village– people must have gossiped, and pointed, and stared. “He should divorce that woman,” they must have said. “She’s no good for you,” they must have thought. But Joseph went on, led by a dream; led by love.

It couldn’t have been easy for Mary, either. She may have been visited by the Angel Gabriel, but what he didn’t add to the Annunciation was that things were going to get a lot worse before they would ever get a little better. And then, one day, a long time from that cradle, “a sword would pierce her own soul also,” just as old Simeon would say. But Mary, with one hand in Joseph’s and one hand reaching out for God– a little like Adam stretching out his finger to God in the Sistine Chapel– Mary goes forward as well.

The shepherds go, but they must have had their struggles, too; and in a few more days we’ll hear of how the Wise Men have to risk their necks and out-fox King Herod in order to see the One rumored to be the Messiah. They risk in order to visit the babe lying in manger, and they, too, go to Bethlehem.

In tonight’s Gospel, it’s the shepherds who have the line of the evening. They are living in the fields, watching their sheep, perhaps watching the stars a little and dozing. But then there appears an angel of the Lord. The angel brings good, but scary news, and then there are more angels, angels everywhere, angels singing of Glory and wonder and mystery. And then comes their great line: “Let us go to Bethlehem.”

Bethlehem is surely a place—that dusty, disputed, troubled, but deeply loved place I mentioned earlier. But Bethlehem is also a deeply spiritual place—it that place where the very depth of God’s love is born.

For Christians, the entirety of God’s love is gathered together and concentrated into a laser-like force that cuts through the whole paradigm of divinity. God becomes human. God voluntarily leaves the god-place of all-in-all, of everything and nothing, of Alpha and Omega and chooses to become some-thing, one-thing. And this, the most fragile, vulnerable and needy thing imagined: a little baby.

But Bethlehem does not belong only to Christians. It is also a place for those who may be uncomfortable with this fleshy, Christian God. Bethlehem as a birthplace for love, for the depth of God’s love in any expression, can serve as a reference point for any love that tries to be more than what we might have ever experienced or imagined. It stands for the possibility of love.

That name, Beit-lehem, literally means, the city of bread, and in many ways I think Bethlehem continues to offer nourishment and sustenance.

Bethlehem feeds Judaism in that it is the birth place of King David, and through him it gives a sense of royalty and nobility and faith in God through success and failure, through blessing, repentance and forgiveness. Bethlehem is also home to the tomb of Rachel, wife of Jacob who was Abraham’s grandson. It is Judaism’s third holiest site (after the Temple Mount in Jerusalem and the Cave of the Patriarchs in Hebron.)

Bethlehem also feeds Islam in that it is the birthplace of Isa (Jesus), regarded as a prophet who was so great that he was taken up by God into heaven.

We who believe Jesus is Emanuel, God-with-us, are fed through the Sacrament of Holy Communion.  We believe that before he died, he offered himself to his friends, and promised always to offer himself, through bread and wine, through body and blood.

For me, Gerard Manley Hopkins captures this idea of Bethlehem as a place that beckons and calls us, calls us to be our very best, our most loving, our most godly, as he writes

Moonless darkness stands between.
Past, the Past, no more be seen!
But the Bethlehem-star may lead me
To the sight of Him Who freed me
From the self that I have been.
Make me pure, Lord: Thou art holy;
Make me meek, Lord: Thou wert lowly;
Now beginning, and alway:
Now begin, on Christmas day. (Poems 77, 1865)

Friends, in whatever way, by whatever road, may we each find our way to Bethlehem.  May we begin to live as people of peace, offering the bread of peace to a starving world.