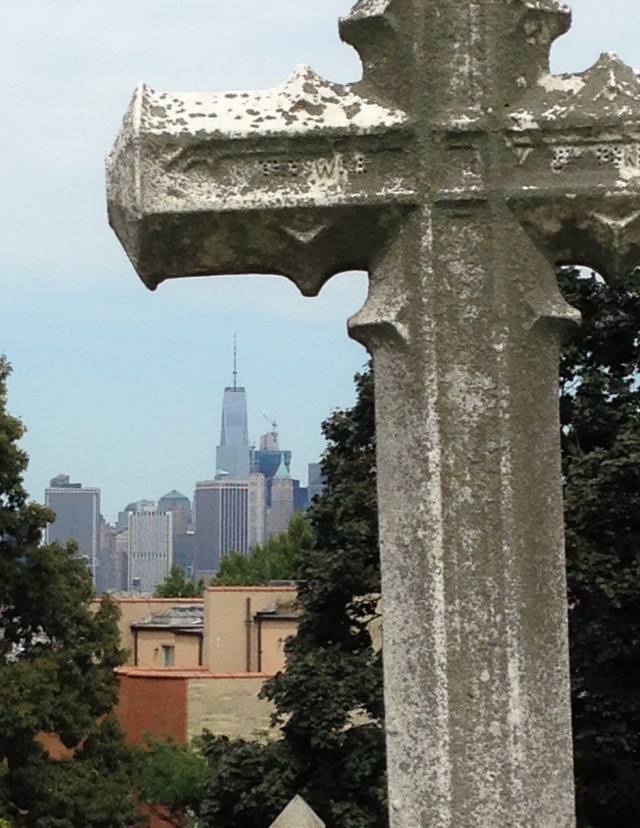 One World Trade Center as seen from Green-Wood Cemetery, Brooklyn.

When I think of that bright, sunny Tuesday fifteen years ago, several things stand out for me. The brightness of that September sky is one of them. It was so bright and beautiful earlier that day, and then it turned dark.   Cuban food is another memory.  Cuban food was brought into the church where I worked in midtown, as a restaurant nearby began to close for the day, and transportation was temporarily shut down, and we were anticipating having to shelter people at the church that night.  I remember the smell—that smell that hung over Manhattan for weeks.  But almost more than anything, I remember the signs, the handmade signs with photographs on them that began to appear everywhere.

Transportation opened up later on September 11, and I took the subway as far south as 14th Street.  But coming up onto the street, that’s when I saw them.  Covering a fence, mounted on a wall, there were homemade signs announcing that someone was lost. Someone was missing. Someone was unaccounted for.

Over the next few days, there were a few stories about people who were found; people who had simply not been able to communicate with loved ones. A friend of mine had had been evacuated from downtown and taken over to Staten Island, but was only able to reach his wife the next day.  In some cases what was lost was found—found to be shaken up, but thankfully, very much alive.

People become lost in different ways. Alzheimer’s or dementia takes a person to some far away place. Disease, drugs or addictions contribute to loss. And of course when someone dies, we sometimes say that we have lost them.

Well—our scriptures today tell us exactly where God is.

God is there. God is here. God is wherever God needs to be, seeking the lost, doing whatever it takes, changing divine plans, changing the course of history if it takes that, just to save and find one lost person.

In the first scripture lesson, the people of Israel feel lost. They feel afraid and cut off from God. They feel so lost that they begin to substitute other things for God—silver and gold and pretty things. They begin to worship their stuff. Finally Moses returns and he gradually helps them find their way again.  He helps them find themselves again. And in the midst of all of this, God does an amazing thing:  God changes God’s mind.  God changes his plans, changes the course of history—just to make a way so that his children can find love again, and can find God again.

Our Gospel also shows us a God who will go do desperate things for us. God will do whatever it takes to find someone and to bring that person home.

Jesus tells the story about a shepherd who has 99 sheep. One wanders off and can’t be found, so the shepherd leaves the 99 and pursues the one.

Jesus also talks about a lost coin. A coin has fallen out of reach, or has gotten behind something, or has seemed to disappear altogether. So, the woman stops what she’s doing and basically turns her whole house upside-down to find the lost coin.

This Gospel about a shepherd who loves and looks for a lost sheep always reminds me of Psalm 23 and the power of that psalm help us find ourselves once again in the love of God.

I especially remember soon after I had been ordained and I was a part of the rota for offering a Sunday afternoon chapel service at a retirement home.  I had been warned that the people who came to the service were in various states of health, and that there were a few that suffered from dementia and were not very present.  But I recall my little service there.  For much of the first reading and the prayer, I felt like I might as well have been speaking to the walls.  Very people seemed engaged, alert, or present.  Several seemed lost—in years ago, or in sweet dreams of a Sunday afternoon.  But then I read Psalm 23.  Suddenly, I notice several people who I thought had been asleep, or unable to follow along, were moving lips, and sounding words, and one older man was reciting the words of Psalm 23 with passion and certainty.  “The Lord is my shepherd, I shall not want.”

God leads us into green pastures, where there is rest and refuge, nurture and sustenance. God lead us beside still waters, slowing the rapids of our life, washing us in healing waters, and helping us find ourselves again.  God restores our soul. Even when we walk through the “valley of the shadow of death,” we have nothing to fear, because God is there. Even if we don’t see God, even if we don’t particularly feel God in that moment—God is there. Even when there are those who die all too suddenly, those whose lives are taken, God calls, God loves, and God welcomes by name.

Psalm 23 reminds us that God leads us finally into a place where there’s an enormous feast, a feast so big that it includes not only everyone we’ve ever loved, but even our enemies, transformed into friends. There in the full presence of God, in the fullness of love, God anoints us and calls us by name.

No one and nothing stays lost from God. God seeks and searches and calls out by our truest name, and calls us into love, into laughter, and into life everlasting. As the church, it’s our job to help one another hear God’s calling. Whether we are the lost who are found, or whether we are among those who fling open the door and welcome those who return—we are, all of us, called to join in the celebration.

We gather in this place at one table, eating from one bread and drinking from one cup. What we do is variously called the Mass, the Holy Communion, the Lord’s Supper. But throughout all, it is the Eucharist, that Greek word meaning “thanksgiving.” We give thanksgiving because we were lost but are found, perhaps because we were kept out or left out, but now are welcomed. We give thanks because through this meal we are invited to be more forgiving, more merciful and more welcoming. Thanks be to God for finding each one of us and for bringing us home and giving us this day of life and love.