Which Cup to Choose? 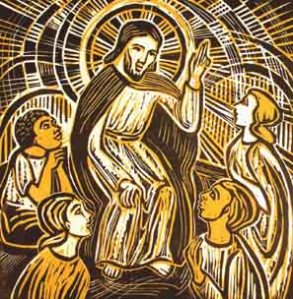 Twice a year, I usually go to a weekend retreat at an Episcopal convent in New Jersey. At dinner on Friday night, one of the nuns welcomes us and gives instructions about the weekend. One thing they always include is the request that each person use only one coffee cup. If everyone used different cups every time they had coffee or tea during the weekend, all the cups would be dirty, so the idea is to adopt one cup and keep up with it through the weekend.

What makes the coffee cup adoption fun is the array of cups. These coffee and teacups have come from every possible Episcopal charity, every nonprofit in New Jersey, a few that look like they came from a yard sale, and some that seem to have a provenance best kept a mystery. And yes, there has been an “All Souls by the Zoo” mug there for a few years, now.

What happens with the mugs is interesting: Most people really carefully choose their mug. They know that since there won’t be any talking for a while, people might associate them with the mug they choose.

In today’s gospel Jesus asks James and John if they are sure they’ve chosen the right cup. They have left their former lives; they’ve begun to follow Jesus. But he asks them, “Are you able to drink the cup that I drink?” “Are you able to be baptized with the baptism with which I am baptized?” These brothers, who Jesus nicknamed “sons of thunder,” thunder forth and respond, “Yes. We are able.”

In today’s Gospel and in several other places, Jesus uses the cup as a symbol, as an image that holds within it a number of different things. The cup from which Jesus drinks holds suffering. It is layered with service and sacrifice. But finally, it is a cup that overflows with joy.

In the Garden of Gethsemane we see the cup of suffering. Jesus prays in agony. His friends fall asleep. The authorities are coming. And he prays to the Father, “if it be possible, let this cup pass from me; nevertheless, not as I will, but as thou wilt.” Through his acceptance, through his prayer and through the love that he continues to show others, Jesus begins to transform the cup of suffering into a cup of redemption.

We need to say one thing for certain: and that is, that suffering is not always changed into redemption. Suffering, itself, is not to be glorified. Children who die of AIDS, women who die from abuse, the elderly who die alone and forgotten—this kind of suffering is pointless.

There is no redemption in it and we blaspheme if we in any way suggest that it might be a part of God’s will. Rather, it is the will of God to redeem, to bring to life, to restore and we are most faithful when we do everything we can to lift one another out of such suffering.

But there is another kind of suffering. Suffering that is on behalf of others is of a different quality.  It is a different cup altogether. In today’s first reading Isaiah sings of a Suffering Servant. In words we also read on Good Friday, we typically see Jesus as the one who has “borne our infirmities and carried our diseases. . . by whose bruises we are healed.” But the interpretation of Isaiah by faithful Jews before Jesus (and after) is also relevant. Israel understood itself as the suffering servant. As the nation suffered but remained faithful, others would be see and would be brought to God. Through the suffering of a remnant, the whole world might be saved. The idea that redemptive suffering is communal rather than individual may sound odd in a culture as self-focused as ours.  But I think about it for a minute, it invites me to worry less about what I, alone, might accomplish. It encourages me to think and pray about what we might all be called to do together. In what ways might we be called to suffer so that others might know redemption and life? (Not a popular question, and not a question easily answered.)

Ours is a faith of one-anothering. Jesus uses that term over and over again: “love one another,” “bear one another’s burdens,” “submit to one another,” and “encourage one another.” Our faith comes alive when we are able to serve one another—not just in volunteering or being busy or performing tasks—but really letting down our guard, allowing the other person closer, and even being open to being changed by the other. The cup of service is one the disciples drink from. They share this cup and they pass it on.

We continue to pass it on. After every Eucharist we pray that we might be sent into the world to love and serve God. Well, we accomplish that “loving and serving” not in the abstract, but by loving and serving those made in God’s image.

Jesus drinks and shares a cup of suffering and a cup of service, but the cup he lifts highest and offers to all is, in the end, filled with joy and celebration. It is, for lack of a better term, a victory cup. It is beyond any hope of a Holy Grail because as we share this cup of the blood of Christ, we really drink in everlasting life, here, together and everywhere the Mass is celebrated.

In this Gospel where Jesus explains that greatness comes through service, and honor comes through sacrifice, he also asks if the disciples are truly able to undergo a baptism like his. Just as Moses led people through the water from slavery to freedom, baptism with Jesus submerges us in death. It is a death to sin. A death to the power of the world. A death to the demands of the devil. It is a death to self and a dying to selfishness. But we are brought out of death into new life. Baptism changes us, it changes everything and we are made new. We are born again and enabled through confession and forgiveness to be born again and again and again. If we choose it, that is.

We have many choices, of course. Too often we begin trying to live a good life, giving occasional attention to God, but gradually drinking more and more of this world. Before we know it we are satiated with ourselves, with work, with relationships, with success, with our goals and plans and schedules. We loose our sense of taste for things holy. And so, to sip of religion can at first seem bitter and strange.

Austin Farrer describes this taste as “God’s goodness” on our palates, a taste with a “new and unthought-of flavor”. “God’s goodness,” Farrer writes, “which we taste in wine and in bread, in friendship and in every blessed thing, is the love that died in agony for our salvation. That is where the taste of it comes out; yet it is not a bitter taste; it is the wine of everlasting joy.” (The Brink of Mystery, p. 67)

And so, the suffering, the service, and the sacrifice, are all poured into one cup, one cup that overruns with everlasting joy. Which cup will we choose? Strengthened by the risen Christ, may we choose wisely, with faith and with love.