Weeds and Wheat Together 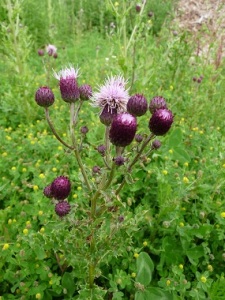 If you were in church last Sunday, you might feel like you’re hearing the same Gospel again. Last week discussed the Parable of the Sower. Some seed takes hold and some doesn’t. Today’s parable continues Jesus’s storytelling, but is slightly different. In this parable, the landowner sows good seed and has every reason to believe it will grow. But his field hands notice weeds and wonder why. While we might not all immediately relate to the agricultural imagery, we probably have felt that question of “why the weeds?” Why does God allow the weeds to grow along with the good seed? Why not just have one nice, weedless garden? Why not fill the world (or at least our part of the world) with people who are like us? Why have the weeds at all?

Some of the weekday readings last week included the Old Testament character Job asking similar questions. You might remember how Job’s and God’s conversation goes. After hearing him out, God finally answers Job, but God answers with yet more questions: “Where were you when I laid the foundations of the earth? Tell me, if you have understanding.” As the writer Susan Pitchford characterizes it, God basically says, “You with the tiny brain, shut up.” (The Sacred Gaze, p. 22).

And yet, with Job and with the disciples, we keep asking those questions, theoretically and practically.  In today’s Gospel Jesus explains that as the wheat begins to grow, weeds also begin to grow, weeds sown by the devil. When the servants in the story get upset about the weeds, the landowner cautions them. “Don’t rip them out yet. Don’t gather them up or try to harvest the good—it’s not time. If you try to get rid of the weeds now, you’ll also do damage to the wheat. Be patient. And by the way, the weeding isn’t your job anyway.”

The disciples who hear Jesus tell this story, ask him to explain, so he tells them that this parable is about the kingdom of God. God has sown good seed. The devil has also thrown in the seed that will become weeds.

But both are allowed to grow, good people with bad people, until the day when God calls home his own children. Jesus says, “Then the righteous will shine like the sun in the kingdom of the Father.”

It’s a simple message from Jesus, but it has complicated implications for us. This is a message about not judging other people, about resisting the urge to decide who’s in and who’s out, who’s worthy and who’s unworthy. It’s about leaving the “weeding” to God.

Most of you know that I spent the last week and a half with our choir in England. As we moved through cathedrals and churches, at several points, it was tempting to feel like we should have been given special treatment—not just because we were the choir. But because we’re Christians. We’re believers. We’re part of the club. And on top of that, WE’RE EPISCOPALIANS.

But guess what? We were treated with the same courtesy and care—nothing more, nor less—than the mobs of indifferent, tired, hot, and boisterous tourists, washed and unwashed, baptized and unbaptized, wheat and weeds altogether. This whole experience was summarized in an event that happened for me on Friday at St. Paul’s Cathedral.

If one is in the queue a little before 5 p.m., near the gate up to the left of the choir, then one is in place to be ushered into the best seats for Evensong. The vergers let the mob in and point people to the seats we all should take, avoiding where the singers and other officials will sit.

Somewhere between a bouncer and a maître d, these vergers are not to be crossed or disobeyed.   The Dean of St. Paul’s might be there. Other clergy, and even the Bishop of London might be there, but even if the Archbishop of Canterbury were there, the real person in charge, the person with the power, is the verger. On Friday, the head verger was a dignified woman with red hair in a bun, resplendent in her black robe with red tassels, and gold embroidery. The verger carries a “virge,” a long stick or cane, from the Latin word, “virga,” meaning rod, staff, or branch. With this silver virge, she points, commands, and rules. When the choir came in, the head verger stood between them and used her pole as a gate, directing traffic. No choir member could possibly go astray. Through the service, as it was almost time for a reader to read, the verger would appear, bow to the person, then aim her pole at their head. The person (be she priest or bishop) would then come forward, as bid, to read or pray, and then follow the verger back to his or choir stall with equal efficiency.

I confess to you that I imagine for a little while how I might direct traffic if I were the verger. I might select different people to sit in choir—sitting that near the singers should be a privilege for those who love music, or who at least plan to listen to the music. In one of the greatest religious spaces on the planet, those sitting near the High Altar should at least not be in short-shorts and flip-flops. And as for the person who used the choir stall ledge to study her map of London—if I were the verger—I’d have used my pole and directed that young lady out of the room.

But that’s not at all what the verger or her assistants did. As regal and imposing as they looked, they were even more gracious and seemingly kind. One brought a cup of water to an older woman who was having trouble in the heat. Another found a chair to be placed next to a person in a wheelchair. And as for the way we were seated—we were wheat and chaff altogether: The very loud man down the aisle from me turns out to have been a Father Canon So-and-so who had studied canon law at Oxford (as he told several people); the Korean kids down the aisle on the others side seemed to be taking it all in for the very first time; the very old English woman sitting next to me at first seemed very stiff, until after the Vicars Choral sang an amazing anthem by a Renaissance composer and she leaned toward me and said, referring to the choir, “They really should be kept on, don’t you think?” We were all on equal ground in that choir. It was only during the prayers, in which the presiding priest prayed simply and warmly for all who might be visiting, “whether of much faith or no faith,” that I remembered the Gospel I would be preaching on this Sunday: “Let them all grow up together. The righteous (who may well look very different than we might imagine) will shine like the sun.”

The Gospel brings us a message about living with ambiguity, especially ambiguity within the church. In every age the Church has had those who would stress its purity and holiness and have those who it deemed less pure or less holy not be counted as part of the church. But as early as the fourth century, Saint Augustine argued against these purists. Augustine said the church is a “corpus permixtum,” a great phrase that points to a mixed body. The church is a mixed body. It is mixed with saints and sinners, with the good and the bad, with the smart and the not-so-smart, with the likable and the unlikable, with the holy and the profane, with the innocent and the guilty. But this mixture IS the church and will be the Church until that day when we see God face to face, and we hopefully find ourselves in the patch of fresh, fragrant, cut flowers, rather than on the other pile.

When Jesus uses this parable to talk about the kingdom of God, I think he means it as encouragement. We’re called to tend, to feed, to grow and help nurture others. We’re not called to weed out God’s garden. And sometimes, if we’re able to resist the temptation to pluck out weeds, we might take a closer look and find that what we initially thought were weeds, are actually something else entirely.

One of the places I visited on this trip was just north of St. Paul’s Cathedral in London, the Museum of the Order of St. John of Jerusalem. As some of you know, the Order of St. John originated with the Knights Hospitallers, who in the Middle Ages offered medical aid and help to pilgrims who travelled to Jerusalem. The American priory of St. John supports an eye hospital in East Jerusalem, and the All Souls Endowment and individual parishioners have helped support the hospital through the years. The museum is on the site of the old priory, set up in the 1140s. In addition to a beautiful chapel and Norman crypt, there is a cloister garden.

As I first walked by the garden, going to the chapel, I thought the garden was a mess. It seemed largely untended and forgotten. I was outraged. I couldn’t believe it was in such bad shape. As I visited the chapel, I began planning (in my head): I would get back to the U.S. and write a letter, and send money, and see what could be done to restore that garden. It seemed a shame that it had been forgotten and untended.

But then, as I was almost leaving, I noticed people sitting in the garden. I decided to take a closer look. Entering the space, I was immediately humbled and I found myself standing in the middle of today’s sermon. All around me were what initially looked like weeds—witchhazel, alder, St. John’s wort, and taller and wilder than the rest, thistle. But they weren’t weeds at all.

Thistle can look like a weed and sometimes it can act like a weed. But thistle is also an important herb. Holy Thistle gave help through the middle ages when there was a plague. According to Shakespeare, holy thistle “’helpeth the hart,’ ‘expelleth all poyson taken in at the mouth and other corruption that doth hurt and annoye the hart.” Milk thistle, Scotch thistle, welted, wooly-headed, dwarf and creeping plume, and many more have their uses. They heal and help. They might look like weeds, but they can be also seem like miracle cures.

The kingdom of heaven takes shape as we grow together—with each other and with the world. Some of the most beautiful flowers can end up being useless and good for nothing while some of the ugliest weeds might prevent death. The weeding belongs to God.

Thanks be to God for the mixed mess of a garden that we all are, because as we grow, there is always the chance that we (all of us) are on the way toward something even more beautiful, even more fragrant, even more pleasing to God.