A most high and humble God 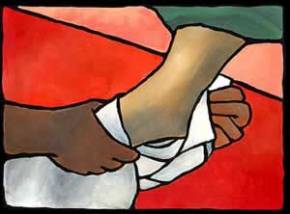 If you go to Bethlehem and to Jerusalem, if you visit the Church of the Nativity and you visit the Church of the Holy Sepulcher, you’ll notice that the holiest of holy places in both churches have something in common.  The entrance to the shrine, to the heart of the holy—(the place marking where Jesus was born in Bethlehem and the place symbolizing where he was crucified in Jerusalem)—that place is low, and just to enter in, most people have to stoop a little.  It’s a similar thing if you visit the Holy Sepulcher shrine at the Franciscan Monastery of the Holy Land, over in Northeast Washington.  Same thing:  you’ve got to become smaller. You’ve got to lower your head, to stoop, and to bend down, in order to enter in.

That’s appropriate, I think.  It’s appropriate that we need to bend down in order to get close to the holiest truths of our faith because “bending down” is exactly what God is doing in the Incarnation.

In one of his Christmas sermons, St. Bonaventure reflects on “The Word was made flesh” (John 1:14).  “These words give expression,” Bonaventure says, “to that heavenly mystery… that the eternal God has humbly bent down and lifted the dust of our nature into unity with his own person.” (Bonaventure’s “Sermon II on the Nativity of the Lord” quoted in Ilia Delio’s The Humility of God, p. 51)  Ilia Delio recalls how this image of God’s bending down reminds her of what she used to feel when she would see her baby nephew in his crib.  The humility of God is like that, she says, “God is at once the small helpless infant who lies quietly in the crib of the universe, and also the strong one who can raise up a fragile human being and draw that person into the embrace of infinite love.  God is Most High and Most Humble” (ibid.)

We get an up-close look at that graceful, humble gesture of God to bend down to us in tonight’s liturgy. In the Gospel Jesus stands from the table.  He takes off his outer robe and wraps a towel around his waist.  And then he lowers himself, he stoops, he bends over, and begins to wash the feet of his disciples.  “Do you know what I have done to you?” he asks them.  And they must have been in shock.  A rabbi doesn’t sit on the floor.  A great teacher doesn’t get on her knees. And as for God, God is high and mighty, demanding and judging, all-powerful, all-holy, untouchable and removed.

“Not true,” Jesus says with his whole being.  Not true, at all.  That’s not who God is.  God is humble.  God comes close.  Jesus says ”You call me Teacher and Lord–and you are right, for that is what I am. So if I, your Lord and Teacher, have washed your feet, you also ought to wash one another’s feet. For I have set you an example, that you also should do as I have done to you. Very truly, I tell you, servants are not greater than their master, nor are messengers greater than the one who sent them. If you know these things, you are blessed if you do them.”

God in Christ turns the world upside down and inside out.  God bends down to us no matter how far down we may be—whether the world has pushed us down, whether we’ve fallen, or whether perhaps we’ve chosen some way that debases or degrades and takes us under… Nevertheless and no matter what, God bends down and meets us.  God touches, holds, soothes, and loves, all so that we might be raised with love.

On Tuesday and Wednesday of this week, you may have heard that there was a lot of activity outside the Supreme Court.  I was there for a while on Tuesday morning and it was good to “show the collar” as they say, for the side of love.  There was a lot of love, but there was also some hate.

It was also good to see a number of parishioners, colleagues, and even a few friends from other cities.  At one point I saw Jack Montgomery across the way, but was only able to yell a “hello,” because there were so many people between us. I knew that on Monday night, he, his husband Kelly, and the three children they adopted last year, went over to the court and offered candy and conversation to some of the people who were camping out.  Jack and Kelly, like many other parents, explained to the children what the court’s decisions on marriage might mean for families like theirs and for so many others.

At some point on Tuesday, a reporter from National Public Radio met up with them.  Prompted by the reporter, with a microphone on for a national broadcast, Kelly asked his daughter “Raine, why are we here?”  And you could hear the four-year-old’s little voice say with some confidence, “Because … because God loves everyone. He hates no one.”  [Transcript from All Things Considered, March 26, 2013; byline:  Ailsa Chang.]

“God loves everyone.  He hates no one.”  Raine got it right.  That’s why a lot of us were there.  And that’s why we’re HERE.  We’re here to receive God’s love, to practice God’s love, and to share God’s love because it is God who bends down to us in the manger, in the footwashing of the upper room, on the cross of Calvary, and on Easter Morning.