Having Salt (but only on my plate, not yours) 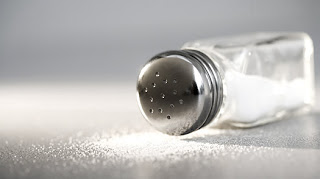 I guess it’s human nature to worry about someone else’s business as much, if not more, than one’s own.  We can watch two children.  Sometimes one doesn’t want the other to play with a certain toy, not because the first child wants it, but because it bothers the first child, for some reason, that the second child has it, or even has access to it.  As we grow older, we sometimes resent those whose practices or ways are different—not because they affect us in any way, but just “because.”  In today’s scripture readings, there’s a lot of squabbling. It can sound very childish, until we began to notice how familiar some of the sentiments might be.
At the beginning of the Gospel, the disciples are all in an uproar—about other disciples. It seems that there are other disciples who are casting out demons in the name of Jesus, and yet, they’re not close followers of the present group. The disciples in front of Jesus want him to criticize the others, to condemn them, and to share in the outrage. But Jesus doesn’t go for it. Instead, he basically says that if someone is not against him, then it’s all right. They’re doing no harm. Don’t worry so much about them.

And then Jesus gets personal. It’s the things in your own life that you should pay attention to, Jesus says. What is it in YOUR life that causes you to sin? Take care of business at home, before trying to solve all your neighbor’s problems.

A similar problem happens to that early community of belief around Moses. Moses is overwhelmed. He complains to God about it, and God suggests he get some helpers. So Moses appoints 70 elders to serve as leaders among the people. But then there are squabbles. “Eldad and Medad are prophesying in the camp,” a young man reports. Joshua buys into the anxiety and agrees that this is a problem. “My lord Moses, stop them!” But Moses says “Are you jealous for my sake? Would that all the Lord’s people were prophets, and that the Lord would put his spirit upon them!”

This problem of overlooking one’s own problems or issues and starting to worry about others is not confined to the times of Moses or of Jesus. If we think of it, we continue to do this sort of thing both in our own church, among other churches, and outside of church.

As a Christian, it’s very easy for me to worry about what the Baptists are saying, or what the Roman Catholics are doing, what they’re doing (or not doing) at the Cathedral.  My sisters and brothers in Christ on the far left unnerve me as the much, if not more, than my brethren on the far right. But I have the same amount of control over all of them—just about none.  When I’m at my most healthy, I worry less about what everybody else is doing, and I begin to focus on what we’re doing here at All Souls. Are we reaching out as we should? Are we including everyone? Are we paying attention to our neighbors? Are we giving our time, our money, our talent to God sacrificially?  Am I saying MY prayers?  Am I reaching out?

Of course, we this tendency to worry about others’ business is not uniquely a religious problem. Wherever we work, or wherever we live, the coworker or the neighbor can sometimes draw our attention away from what should be our priorities. We worry about the money others make rather than trying to figure out how to enhance our own resume. We worry about the person down the hall who has gotten a promotion—even though we didn’t want the job, we think we would have had a better choice. And on and on the list goes.

Today’s Gospel ends by encouraging the disciples to “have salt in themselves,” to be distinctive, to stand out.  He encourages them not to be stale, not just to fit in blandly. A good sailor is called a “salty dog” or an “old salt.”  It’s someone who knows what to do with a boat, navigates the waves with a combination of grace and fearlessness, and looks out for passengers.

This summer I had the pleasure of sailing one day with a salty dog who’s a college librarian when she’s on the land.  I watched as she absolutely commanded the boat, all the while making sure people had water, were safe, and were enjoying themselves.  Even while she was having fun, telling stories and being one of the gang, she never once took her eye off the goal, or lost track of the wind.  Even on a simple day’s outing, she commanded her little portion of the water.  I wouldn’t hesitate to put her in charge of a huge ocean liner, as well.
Jesus was a sailor, and I wonder if when he tells us to “have salt in ourselves” he wasn’t also hinting at a nautical meaning.  Take charge, be responsible, keep your eye on the goal, stay with the vision.  But never lose track of those in your care, of your guests, your visitors, and those who don’t have the skill, knowledge, or gifts that you enjoy.
Of course, too much salt can (of course) make everything taste the same. But “having salt in us” means that God accentuates what is different and best about each of us so that together, the greater whole is enhanced and brought to new life.

May God give us the grace to stay in our own boat and worry less about the ones we might see across the water.  May we learn not to be bothered so much by the seasoning of others, but to “have salt in ourselves” in our own way, to God’s glory, as we follow Jesus Christ.