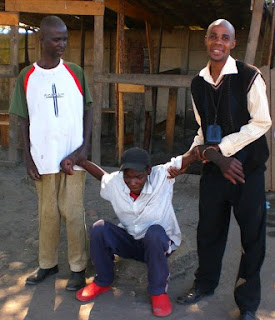 Two friends help another in Zambia.

But Thursday night there was a meeting with some of those who are planning for accessibility and changes to our building.  The facilitator of the meeting asked everyone to say a few words about why they come to All Souls.  What led them to All Souls or why do they stay?  As each person shared his or her story—in simple, unrehearsed, immediate language–, it was everything I could do to keep from crying.  I was witnessing Christ in our midst, revealing himself in ordinary (but extraordinary) ways, ways that I often overlook or ways of which I am simply unaware.  Through other people’s stories, reflections, experiences, failures and successes, I was raised up, I was lifted up, I was set back up to be able to move forward, renewed and strengthened.

Maybe it’s through conversation, through prayer, through political action, or charity;  whether it’s a stranger, a family member, a friend, or a fellow parishioner—the opportunities abound for us to participate in God’s work of raising up all of creation, and gathering us to himself.
“I am the living bread that came down from heaven,” Jesus says. “Whoever eats of this bread will live forever.”
Let us give thanks to God that we are being raised up, that we can participate in this holy work until we are, indeed, all raised up on the last day.
In the name of the Father and of the Son and of the Holy Ghost.  Amen.