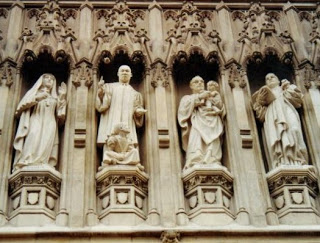 Some of you will be familiar with William Ury, who works in negotiation, mediation, and conflict management.  He’s a part of the Harvard Negotiation Project and has authored a number of books.  In his little book called The Third Side, he begins with a true story of something that happened to a friend of his.
He tells the story of a friend of his, Herman, who was walking with his wife in Lower Manhattan.  As they began to cross a street at the corner, a car came speeding and screeched to a halt, barely missing them.  Furious, Herman slammed his fist on the hood of the car.  You can imagine what happened next.

A young man jumped out of the car and began shouting, “What are you thinking, hitting my car?”

“Well, you just about ran over me and my wife.”  And the shouting match was on, escalating, and threatening.  In that the couple was white and the drive of the car was not white, the whole scene took on racial overtones.  A crowd began to form, encircling the noise and what seemed any minute to break into violence.   Just as people began to take sides, Herman noticed an onlooker.  This was an older, black man.  The man didn’t say a word, but began to gesture with his hand, palm down, moving it up and down as if to say to the young driver, “Okay, now, cool it.”  The young man, the driver, visibly struggled to control himself, but suddenly got back in his car, got in, and drove off without another word (The Third Side, 4).

The Greek word for witness is marytys, or martyr in English.  A martyr, among people of faith, is often portrayed as one who is persecuted or who dies for his or her faith.  But in its truest sense, a Christian martyr is simply one who bears witness to Jesus Christ.

Today’s scriptures are not the cheeriest.  They speak of difficulty and demand.  The Old Testament lesson gives a brief profile of the prophet Amos.  Amos is given the hard job of speaking out against power, in this case against King Jeroboam.  The king’s own priest gets wind of it, tells the king, and then begins to speak out against Amos.  It’s as though the religious power structure turns against him.  “Go preach and prophesy somewhere else,” they tell Amos.  But Amos says, I’m not in this to make a name for myself.  I’m little more than a migrant farm worker.  (The biblical sycamore tree is different from a European sycamore.  What Amos is talking about is also called a Mulberry Fig, and produces a fig-like fruit.)  Amos basically says, “Look, I’m a nobody.  But God called me and told me to step up and tell the truth.”

But, you may say, we just heard in the Gospel what happens to people who speak the truth.   John the Baptist DID speak the truth, and we have the awful story that is all too current—literally in other parts of the world, but just as real in our world as people lose job, reputation, friend, retirement, social standing—when they speak hard truth.  With King Herod, power prevails, in the short run.  And that’s the thing so easily forgotten.  The powerful appear to win, but they only have the advantage for now.

The Letter to the Ephesians gives an eye into God’s long-run plan.  God has a “plan for the fullness of time, to gather up all things in him, things in heaven and things on earth.”  That’s a huge plan.  It means that in Christ everything will find its completion and fulfillment.  In Christ, everything will grow to its right purpose and ending—event those who are cut short in this life.  Everything and everyone is redeemed and perfected, brought to completion in God’s good love.
That sort of hope doesn’t allow us to rest content with injustice in this world, assured that life in the next will be better.  Instead, hope in God compelsus to live forward, in the open, in the light.  It’s that hope in which we live, toward which we point… that hope to which we bear witness.
These are heavy scripture readings for a warm day in July, and especially for a day in which we celebrate the baptism of Emersyn.

But there’s something appropriate about babies crying at a baptism.  They may cry because they’re up too early and it seems like it’s time to eat.  Or maybe they cry because they see people praying, and preachers preaching, and choirs singing, and so they just want to be a part of things and makes some noise.

But a few tears are in order.  Maybe babies cry at baptisms because they know, at some level, that it will not always be easy to be a person of faith, to be a person of integrity.  It won’t always be easy to live a life that follows the loving, just, and merciful way of Jesus Christ.  But this is the beginning and we’ll do our best to get Emersyn off on a good start.

We baptize her with water—water like God used at the beginning of creation to create and give life.  Water that quenches the dry places and washes clean.  Water like Jesus was baptized with, water like in that “river whose streams make glad the city of God.”

After baptizing with water, we anoint with oil.  In our work, oil makes an engine run, and things gets clogged up and stalled when it runs out.  Oil makes a lamp burn with light.  In so oil in anointing seals with the Holy Spirit, to keep our spiritual engine running, and to keep the fire of the Spirit burning within us.

And then, after getting poor Emersyn wet and oily, we give her a candle lit from our Paschal Candle.  And we say, to her, “Walk always as a child of the light and keep the flame of faith alive in your heart.”

Will Emersyn one day be like the man in the story I began with?  With she have the calm and courage to stand for peace, for truth, for Christ?  When we are in situations that call out of us every ounce and memory of faith, what will we do?  What will we say?

May God strengthen us with the faith of martyrs, so that as we have been adopted as Christ’s brothers and sisters, we might live with him today and for ever.