The Weight of Forgiveness 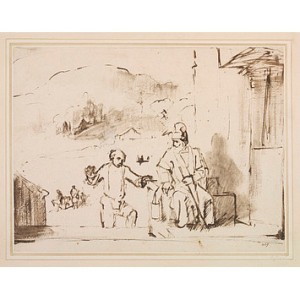 There’s a story from the Desert Tradition that has to do with forgiveness. As many of you know, the Desert Tradition began in the 3rd century when women and men left cities to live in caves or small communities in the Egyptian desert, some looking for holiness, some trying to find themselves, and most trying to find God. Abba Moses was one of the most revered of these, and he was always being asked to stand judgment or as witness about some matter. One day a bunch of the brothers came to him. They wanted him to be a part of a council that would pass judgment on another brother who had committed some terrible sin. Abba Moses was not interested in being involved. But eventually, they convinced him to go to such and such a place on such and such a day and join them. He went. But he put on his back a jug of water. The jug of water leaked as he walked. It leaked in such as way as to drop a little water out with each few steps.

When he reached the gathering, the others saw him, but they were puzzled about the jug strapped to his back. When they looked at him for an explanation, Abba Moses said, “My sins pour out behind me wherever I go, and yet I have the audacity to come here and judge someone else’s errors?”

Simone Weil writes that when we say “forgive us our debts” in the Lord’s Prayer, we are asking God to “wipe out the evil in us.” But, she says, God doesn’t have the power to forgive the evil that is in us—while it still remains there. “God will have forgiven our debts,” she says, “when he has brought us to the state of perfection. Until then God forgives our debts partially in the same measure as we forgive our debtors.” (Waiting for God, “Concerning the Our Father,” p. 225)

Simone Weil hardly represents orthodox Christian teaching, but her words give me hope. They give me hope because they point to the difficulty of forgiveness. They point to the incompleteness of forgiveness in our lifetime. That gives me hope when I can’t bring myself to forgive (yet.) It gives me hope when I have to live with the fact that someone else may not be able to forgive me.

Our scriptures today have to do with forgiveness, and with the weightiness of sin. Sin, evil, wrongdoing—whatever you want to call it—weighs. It is heavy stuff. It’s like a full jug of water strapped to our back, only it doesn’t leak nearly quick enough. It slows us down, it encumbers us. Sometimes it is so heavy, it disables us.

Shakespeare’s Shylock (The Merchant of Venice) was on to something when he demanded a pound of flesh for the forgiveness of a debt. But Shylock himself learned that a pound presents difficulties. Even a pound cannot easily be exacted. Debts might more accurately be weighed in tons.

As Christians, we are to be on the side of lightening the load, of lifting the weight. But the really good news this day is that ultimately, that is not our work. Rather, it is the joyful, loving work of Jesus Christ.

But I am suggesting that ESPECIALLY today, the scriptures are calling us to notice the weight. Notice the weight of sin or resentment as it increases the longer we carry it. And remember and notice whenever that weight is lifted.

In the first reading, from Genesis, Joseph forgives his brothers. But a long story has brought us to this point. This is the same family in which the brothers have enough of Joseph being the favored son, and so they almost leave him for dead. But at the last minute they decide to sell him into slavery, instead. Later, the tables are turned. Joseph is in a position of power and his brothers approach him (not recognizing him), asking for help. Joseph gives them a little help, but begrudgingly. He tests them. In a way he even taunts them. He does not forgive easily or quickly. But eventually Joseph becomes aware of the weight he’s been carrying.

In chapter 45, Joseph “could not control himself before all who stood by him; and he cried.” He cries as he lets go. He cries as he forgives. In today’s reading Joseph and his brothers’ father, Jacob, has died. The brothers are afraid Joseph will now get revenge on them.

But Joseph has forgiven once and for all. The weight is gone. Why would he pick it up again? It’s for his brothers to trust and to feel the lightness they have received.

In the Gospel, Jesus continues a conversation about forgiveness that we’ve heard parts of on previous Sundays. Peter asks Jesus, “Lord, if another member of the church sins against me, how often should I forgive?” And then, as if to look for some kind of approval, some recognition for his efforts at forgiving, Peter adds, [Should I forgive them] “as many as seven times?” Jesus answers, “Not seven times, but, I tell you, seventy-seven times.”

And then Jesus tells this story about a person who has a debt forgiven. No sooner is this one’s debt forgiven, and he forgets. He sees someone who owes him and demands repayment immediately. The point of the story is not about the fickler forgetfulness of people. The point has to do with the source of the forgiveness, the place and person from whom the forgiveness begins. In the story, it’s the king who forgives. In the story of our faith, it’s God who forgives.

God forgives. We receive that forgiveness, that lightness, that removal of all that is heavy, and binding, and weighing us down. And it for us to help others lighten their loads. Sometimes we do this by forgiving, or as last week’s Gospel put it, “by loosening, or unbinding.” But sometimes, we begin the work of forgiveness (I think) by handing it all to God, for God to work on. There are times when the work of forgiveness is just too much for us, and so (it seems to me) the most faithful thing to do is to turn it over to God the Author of All Forgiveness.

Almost every Sunday at All Souls, whenever a prayer of confession is used, we hear words of absolution and forgiveness. And then we hear again, and again and again, what are referred to in the Prayer Book tradition as the “Comfortable Words.” They are words of comfort. They are words of assurance, refreshment, and promise. (from Matthew 11:28-30)

or as Eugene Peterson’s translation The Message has Jesus say,

Are you tired? Worn out? Burned out on religion? Come to me. Get away with me and you’ll recover your life. I’ll show you how to take a real rest. Walk with me and work with me—watch how I do it. Learn the unforced rhythms of grace. I won’t lay anything heavy or ill-fitting on you. Keep company with me and you’ll learn to live freely and lightly.

Freely and lightly. Those are indeed comfortable words and words of refreshment. May we hear and know the forgiveness of God, so that even in this life, we might begin to be made holy, forgiving, and free.