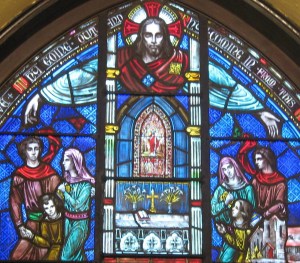 All Souls window in the narthex of the church.

Today we hold our Annual Parish Meeting, which according to the church bylaws, is be held on the Third Sunday in May. The official meeting will be after the 11 a.m. Mass, in the undercroft, but this morning I’m reviving an old All Souls custom by offering my annual report in the form of a sermon. And the scriptures for today help me to do just that.

“Day by day,” we’re told, those early Christians “spent much time together in the temple… praising God and having the goodwill of all the people.” Most people experience us first through our worship. And we have continued to worship richly and fully. We blessed animals in October, and stretched limbs through yoga in Lent. Morning Prayer was said four days a week, Mass said three days a week, Stations of the Cross were prayed, people were blessed, healed, baptized, and buried. Through it all we have been led by amazing musicians. We spent most of 2011 with Philip Cave and said goodbye to him in November. It was then that we said hello to Jeff Workman and began what we imagined would be a new time of energy and growth in our music. And so, we keep on praying and we keep on singing.

The Acts of the Apostles describes a community of believers who “devoted themselves to the apostles’ teaching and fellowship, to the breaking of bread and the prayers. . . .”
We have broken lots of bread together. We have grown closer as we’ve continued our communion beyond the altar and through sharing fellowship in the undercroft, in homes, at nearby restaurants, at the parish picnic in Rock Creek Park. The foyer dinner program, the men’s fellowship, the Wise and Mature luncheons, a country western night, newcomers’ receptions— all helped us get to know one another and welcome others.

We’ve tried to be good stewards of all that we have and keep our household in order. All Souls are Green helped us conserve energy with new lighting, more accurate thermostats, recycling, and educational programs. The Bethany Guild was formed to help with organization, sprucing up, and general hospitality.

With the leadership of Dale Lewis, we began a visioning and planning process with MTFA architects and ambassadors from the congregation. We began putting dreams to paper and seeing what might work. We continued in that process as we prayed and plannned and met, and continue to work together toward accessibility and smarter space.

We’ve broken bread that nourished the body and the soul, but we’ve also broken bread that nourished the mind. The adult forum in 2010 began with Interfaith Dialogue, moved through the Evolution of Belief, continued with Living and Dying in Faith, and culminated with a mini-series on the Rapture. Our seminarian, Seth Walley, made his senior project our Rapture series, and Seth was one example of the nurturing power of our parish. We also encouraged Cameron Soulis in her year of discernment, sent Lisa Zaina off for her first year of seminary, cheered Shawn Strout on in his second year of seminary, and Norm Whitmire in his third year.

We shared our resources with others in need, giving sacrificially of time and our money. People from All Souls volunteered at Christ House, Transitional Housing, Habitat for Humanity, the Heifer Project, the Bishop Walker School, and the St. John Eye Hospital. In 2010, mission grants from the All Souls Endowment allowed us to support programs and ministries in Washington, DC with grants of over $30,000, and to international mission efforts with over $20,000. Volunteers and/or resources went to Haiti, Guatemala, Honduras, Israel, and South Africa.

It was in April of 2011 that the Rev. Sharron Dinnie, from Springs, South Africa, visited All Souls, preached on Sunday, and met with many in the parish. Having contributed money, we decided to do more, and so a handful of us visited Johannesburg in October. It was a trip that changed us, and we hope to return in spring of 2012.

Like those early disciples in the Acts of the Apostles, we were blessed by the Lord’s adding to our number. Some of this happened because All Souls became more visible. Even though we had enormous snowstorms during the early months of 2010, we were open, and people found us and prayed with us. When things warmed up, the garden guild continued its weekly conversation and outreach with the neighbors, and in June, we had a sizable delegation in the DC Pride Event. A number of parishioners staffed a booth at the Pride Festival, and helped people see that a living, breathing, moving Christian church can be a lot more fun and look a whole lot different from what they might have ever imagined.

Our second scripture reading, from the First Letter of Peter, speaks of endurance. It speaks of times when things don’t always go right or even seem to go fairly, but we endure together, by faith. The economic recession began to catch up with us in 2010 and we made some difficult decisions regarding the church budget. It made us lean and trim and some of our bones became visible. We did away with the full-time sexton’s position, relying instead on a cleaning service coming in for a few hours each week. We cut the parish administrator’s hours back.

Though our programs continued, and expectations remained, this meant that a parish of some 350 active parishioners had one full-time employee —the rector and the only priest. We were grateful that Father Worthley continued to volunteer on the Sundays he was in town, and many parishioners redoubled their efforts at volunteering and pitching-in, especially Clark Ball, Harriet Curry, Barry Huber, Terry Horan, Tom Mabon, and Oscar Prado. We have endured 2010, and a few more volunteers have joined us in 2011. But if we are to flourish, we will need to plan, and work, and contribute toward growth in new ways and at new levels.

The Gospel reminds us that today is often nicknamed Good Shepherd Sunday. It reminds us of our focus, the Shepherd around whom the flock gathers, by whom the sheep are led. We are reminded of our spiritual home that is here, and we are also pointed forward as we ask what it means for each of us to be called by name. And so the question comes up for us, “What does it mean for us to be the children of God?”

In our effort to be grown-up and serious Christians, I worry that we have sometimes forgotten what it means to be children. And we have forgotten to welcome the children, as Jesus taught. Granted, the children of All Souls are not always here, and when they are, it’s hard to keep up with them. But our classrooms are inadequate. Our time frame works against us. We have “made do” with too little. Busy families have come to us with low expectations for a Sunday school, and we have not done enough to raise those expectations. A few parents and a few other volunteers have helped as much as they could, but near the end of 2010, and into 2011, we have seen that much more is needed. And we will do more in the future.

The Good Shepherd calls us each by name. That happens not only at our birth, and at our baptism, and at our death, but it also happens throughout a life lived in faith, a life lived in openness to God’s continual calling. I’m grateful for those who have answered God’s calling to serve, and especially thank Bill Miller, Bob Publicover, and Jim Solomon, who complete their current terms on vestry. Larry Sturgeon continued his amazing service as volunteer treasurer. Our Endowment Board continued its fiscal leadership and guidance in mission support.

And thanks of a most special kind goes to Nancye Suggs, who completes her time as Senior Warden of Vestry. I’ve written elsewhere of my gratitude to Nancye, and we’ll be making a special presentation to her a little later on.

Thanks, in advance, to those who are hearing God’s call to stand for vestry in today’s election. I know that in saying “yes” to God (or at least saying “maybe”) they are, in effect, saying “no” to other things. I know that it’s no longer fashionable to serve on committees or to volunteer at church, and so, both I and the larger parish thank them for their service and their willingness to sacrifice for others.

Jesus says, “I come, that you might have life, and have it more abundantly.” We are so very blessed in this place. Every day that we are here is a gift. The building is beautiful, of course, and we give thanks for the way it shapes us in the beauty of holiness. But God blesses us even more richly in, and through, one another.

And so, thank you for the privilege of serving as your rector and thanks be to God for a very good year.

Thanks be to God who revives our soul,
who guides us and comforts us,
who nurtures and anoints,
who showers us with goodness and mercy, for ever and ever.