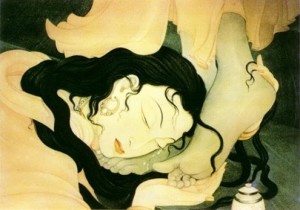 Mary anoints the feet of Jesus by Frank Wesley

On Monday of Holy Week we read John 12:1-11. We heard how Jesus visited Lazarus, Mary, and Martha soon after he had resuscitated Lazarus from the dead. It was during this visit that Mary took some expensive perfume and began to anoint the feet of Jesus. Judas, who very soon would betray Jesus, looked on and criticized Mary for her lavish gesture, suggesting that the perfume could have been sold and the money given to the poor. But Jesus answers him by suggesting that Judas is missing the point. The thing that matters most is not the perfume. The thing that matters is not even the act of Mary’s anointing.

Instead, the crucial thing is that Mary believes in Jesus. She believes that he has healed her brother and brought him back to life, and she believes that somehow Jesus is the key to ongoing life, to life at its richest, to life with God. The religious rulers were right to worry about this “belief in Jesus,” because such belief did, can, and always will change the world.

Belief in Jesus and his life-giving body (both the Body we receive in Holy Communion, and the Body we form with other believers) has sustained us this week at All Souls.

It was in the afternoon of Palm Sunday that some of us learned of the death of our friend Jeff Workman, our organist and director of music. After we waited for his family to be notified, we began to share the sad news with the vestry, the choir, and the extended parish community. Hearing that a young-looking man in his fifties had died of a heart attack did little to comfort or help make sense of the situation.

When someone dies, I do not care to hear theological justifications or pious clichés. I don’t care if God needs another angel and I don’t think there is always a “reason for everything.” Life is richer and more complex than that. Life (and death) is more mysterious.

But what I do know is that Jesus is the Way, the Truth, and the Life. Faith in him brought Lazarus out of the cave. Faith in Jesus helped the criminal of the cross to see paradise. Such faith will carry us through any difficulty, any trial, and any heartache. Belief in Jesus will carry us from Good Friday to Easter, from tears to laughter, and from death to life.