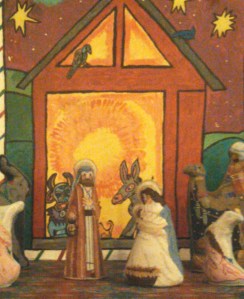 Detail of the All Souls Altarpiece

The other week, the Foundation Fighting Blindness had its second annual “Dining in the Dark” dinner. [See the Washington Post article here.]

About ten years ago, some in Europe and here began turning out the lights for dinner. But not just turning out the lights. All door and window cracks are covered up. Cell phones and watches and other things that light up are not allowed. (At the dinner the other week, it was reported that whenever the flicker of a cell phone was seen, the people around that person began shouting, “Cheaters!”) This way of dining was created as a way of heightening the senses, of helping people really pay attention to the food (even as they paid exorbitant prices for the experience.)

But the dinner for the Foundation Fighting Blindness had another goal. It raised money, but it also invited people with sight to experience a little bit of what being blind might be like. Those helping to put on the fundraiser walked around the room wearing special night-vision goggles. But the wait-staff were all people who were blind or visually impaired. They had been trained earlier in the day.

Darkness and light are primary images for Christmas. A dark church glows with candles and merry faces. The first scripture reading last night was from Isaiah: The people who walked in darkness have seen a great light; those who lived in a land of deep darkness—on them light has shined.” And then we have today’s Gospel.

The light shines in the darkness, and the darkness did not overcome it. There was a man sent from God, whose name was John. He came as a witness to testify to the light, so that all might believe through him. He himself was not the light, but he came to testify to the light. The true light, which enlightens everyone, was coming into the world….And the Word became flesh and lived among us, and we have seen his glory, the glory as of the father’s only son, full of grace and truth.

God has come into the world in human form. That means that God understands how we feel (whether good or bad), how we move (whether easily, or with some challenge.) God understands what it’s like for us to be in relationship with other people—the difficulties and the absolute joys of family, of friends, of possibility. The Gospel actually hints at the relationship of the Holy Trinity within God—that ongoing dance of light that is Creator, Christ, and Holy Spirit. At Christmas we celebrate the incarnation of God, God’s becoming flesh, and it’s this “becoming flesh” that allows God to lead us through the dark and to be with us in the light.

At that Foundation dinner, some of the wait staff were people who couldn’t see. But that meant they had other senses that were heightened. Because they knew what it was to walk in darkness, they could lead others.

We have probably felt this kind of help and support from other people. It’s the person who has been there before—who has survived the cancer, the heart attack, the difficult family, the divorce, the death of a loved one, the pull of addiction—it’s the person who has walked through the darkness that is often able to help us find the way out.

Because God has come into the world in Jesus Christ, God has that same ability, but to an infinite degree. Having experienced rejection, sadness, pain, suffering, temptation, death, hell— Jesus rose again to lead us in love, laughter, joy, peace, serenity, and the ability to live—to live in our own skin in this life, and to live in spiritual bodies in the next.

Frederick Buechner expresses the importance of the skin and bone, of body and limb, of the incarnate, when he points out that

All religions and philosophies which deny the reality or significance of the material, the fleshly, the earth-bound, are themselves denied. Moses at the burning bush was told to take off his shoes because the ground on which he stood was holy ground (Exodus 3:5), and incarnation means that all ground is holy ground because God not only made it but walked on it, ate and slept and worked and died on it. If we are saved anywhere, we are saved here. And what is saved is not some diaphanous distillation of our bodies and our earth but our bodies and our earth themselves . . . One of the blunders religious people are particularly fond of making is the attempt to be more spiritual than God.” (Wishful Thinking: A Theological ABC, p. 43.)