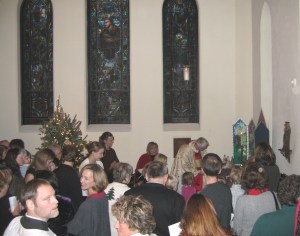 The children and their families place the nativity figures in the creche in the Mary Chapel.

A homily preached at the All Souls Children’s Mass at 4 p.m on Christmas Eve. The Gospel was Matthew 1:18-25.

If you were to draw your own picture of the birth of baby Jesus, what would it look like? Is it a barn out in the country, or a garage in an alley of Washington, DC? Is he born on a bale of hay, on a used mattress found in the trash, or in a borrowed crib? How would you picture it?

This year, Louis von Rago, a member of our church, painted a new altarpiece for us. And it’s funny, if you look at it. There’s a cat in the barn (because everybody knows that there’s always a cat in the barn), and there’s a great light in the barn. It almost looks like it’s on fire. But it’s not on fire—it’s just a whole lot of light because, as Louis says, “The Holy Spirit’s in there and the Spirit’s really busy.” The angels are funny. One is playing a saxophone. One’s playing a guitar. Some are singing “Gloria in excelsis Deo” and others (who must not know Latin yet) are singing “happy birthday.” And we’ve added other people, haven’t we? We’ve added all sorts—we read the Gospel story about how angels came and shepherds came. We know the other stories in scripture about how the Wise Men come, and the shepherds. We might even know other traditions about other people who come to the manger—there’s a song about a little drummer boy, and in our own crèche, you bring others—Barbie and GI Joe sometimes appear, and we’ve had various Transformers come to see the Baby Jesus. Barney came one year, but I think the other animals laughed at him because he was purple and all…. Dora and Diego might come by, but then, they’re so busy, who knows?

So, again, if you were to draw or create your own crèche, your own manger scene, who would be there? I hope you would be there. And I hope everybody you love would be there. And I also hope even the people you might not like very much—people who’ve been mean to you, or ignored you, or said ugly things to you—I hope they might be invited too, because God’s love can change all of us. Jesus is born to bring love and to help us be more loving. By watching him, by worshipping with him, by loving like he loves, we become closer to God and God comes closer to us.